A Geeks' Trip to London. Codebreakers, Boy Wizards and Cosmonauts

Last weekend I had reason to be in London and although we had some things to attend to whilst there, decided to take the opportunity to see some sights during our trip. As my teenage son was coming with me, a few other trips got added to our itinerary at his suggestion.

Here are the three highlights of our trip. It turned into a bit of a geeks' weekend.

Driving to London we made a detour to Milton Keynes. This was not to admire the bland curves of the MK Stadium, 30,000 seater home of the MK Dons and venue for three 2015 Rugby World Cup matches, but to visit Bletchley Park.


Bletchley Park was home to the World War 2 codebreakers. Churchill described their work here as shortening the war by two years, and it was home to an eclectic group of people. Most well known amongst them was Alan Turing, the mathematician generally considered to be the father of computing. Persecuted during his lifetime for his homosexuality, his achievements are only now getting the recognition which they deserve. In the early 1990s a campaign was launched to save the codebreakers' huts at Bletchley Park from demolition by housing developers and now preserved, a museum has been built in the huts to explain the work of the codebreakers. The development of the exhibits is an ongoing process and now the grounds and the mansion house, which dates back to the 1870s, have been restored to their wartime appearance. The German Enigma machines were used to scramble messages into unintelligible ciphers. The settings were changed daily to allow trillions of possible combinations, making the cipher virtually unbreakable.

Pride of place is given to a rebuilt Bombe machine, the machine which Alan Turing and Gordon Welchman devised to break the Enigma code used by the Germans during the war. Daily it was set running to try to work out the combination for the day, to allow messages to be understood whilst they were still operationally relevant.


In this room a bunch of men in tanktop sweaters with pliers sticking out of their pockets and cables slung around their neck proudly demonstrated the machine in action.


In other buildings on the site are found equally geekish exhibitions. One building houses the National Radio Centre, a museum on the history of radio communication. Here we found more excited middle aged men huddled around their equipment, as they tried to contact a home made satellite which was apparently passing overhead whilst we visited. Nearby is the National Museum of Computing which houses an amazing collection of ancient computers and mainframes. Among them is a working version of the world's first electronic computer, "Colossus", which they have rebuilt. It was developed at Bletchley Park in 1944 to decipher the more complex German Lorenz codes. It could do the calculations required to break the code in a matter of hours that were taking people weeks to break. With 2,500 thermiotic vacuum tube valves in each machine there were two of these working at Bletchley Park by June 1944, meaning the Allied army could be sure that Hitler had swallowed their deception plans prior to D-Day on 6 June 1944.


Bletchley Park was an unexpected treat, suitably amateurish and homespun at times, but conveying an excitement and buzz about the place too. Nice cafe in one of the huts and no need to pre-book tickets, just turn up and wander around

As my teenage son got to choose where else we visited on our trip, we inevitably ended up at the Warner Brothers Studio Tour in Leavesden, just outside the M25. The Harry Potter films were produced here over a ten year period and now many of the sets, props and costumes are laid out as a visitor attraction. Some people have seen the films and found them mildly distracting, some people read the books cover to cover on the day of publication, re-read the whole series monthly and can identify each brand of confectionery which acts as a background prop in the film. One of these descriptions fits for me, one for my son.

We arrived on a Friday afternoon when the London children were at school, but the place was absolutely heaving, with apparently equal numbers of French families, Japanese tourists and locals jostling for position. Entry times had to be pre-booked before visiting and there were very few slots left on the day we wanted to go. They recommend spending three hours on the visit, and that is probably about right as the place is absolutely huge. Film sets for other films still ongoing can be seen behind fences outside the exhibition space, in what is still an active film studio.

You start off by being led as a group into the set of the Great Hall at Hogwarts, which was laid out for a Hallowe'en feast when we were there. After that you wander through a large hall of props and sets from the films. My son had been before and reliably informs me that they had changed a few things around since his last visit. 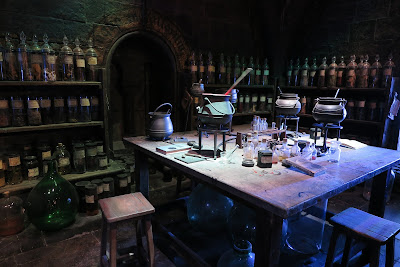 I found the attention to detail and the craft of the prop makers fascinating, from labels on bottles, to portraits decorating hallways (many of which feature wee Easter eggs of cast and crew members or incidental characters from the books, apparently). 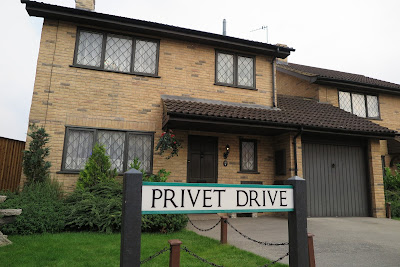 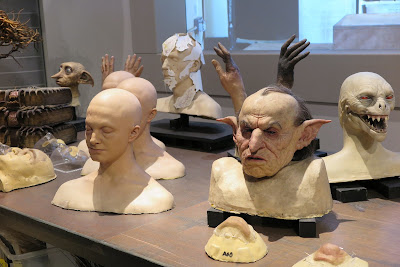 An outdoor section which is home to the houses of Privet Drive also has a Ford Anglia and Hagrid's motorbike from the films, which you can pose upon. You can also hand over money to get photos of yourself flying a broom or sitting in a railway carriage in front of a green screen.

We decided against a frothy pint of (alcohol free) Butterbeer in the cafe, as my son had tasted it before and warned me it is rotten, but we did get waylaid in the gift shop buying armfuls of junk, chocolate frogs and Bertie Bott's Every Flavour Beans. I'll be honest and say that my son enjoyed it more than me, but he did absolutely love it, so we were all happy.


I have tried to find an excuse to get to the current exhibition at the Science Museum in London ever since I heard that they were planning it. Running until March 2016 this exhibition tells the story of how the Soviet Union became the first nation to explore space. It starts with early Soviet art and science fiction from the 1920s, including some fascinating sketches of ideas for space suits, airlocks and spacewalks by Tsiolkovsky, the early pioneer of astronautic science.

There is plenty about Sputnik, the iconic first ever artificial Earth satellite, and its cultural impact (a 1957 edition of Paris Match said the "the dogma of the USA's technical superiority has been shattered"). The remarkable stories of the first dog in space Laika, of the first Cosmonaut, the ever-smiling Yuri Gagarin and the first man to walk in space, Alexei Leonov are great to hear. Leonov's story demonstrates the relatively Heath Robinson attitude of early space travel, as he had to let air out of his suit, which had over-inflated in the vacuum of space, to fit back into the narrow door of his Voskhod 2 module.

As impressive as seeing the actual Vostok and Soyuz landing modules are some of the Socialist Realism artworks and propaganda created around the Cosmonauts. One of the most iconic cosmonauts, and a hero of mine, the first woman in space Valentina Tereschkova is well represented here, with some of her actual space suits. Models of the Soviet moon landing modules and rovers are seen too, missions abandoned after the Apollo astronauts got there first.

From the modern era we have equipment from the Mir space station, which was in action from 1986, through my teenage years when I was right into all this stuff. Mir meaning peace, seemed to show a way to use space for peace and science, as opposed to Reagan's Star Wars fantasies of missile-destroying laser satellites. The exhibition on Mir captures the history of the end of the Soviet Union, as the cosmonauts launched as Soviets in 1991 and came down to earth as Russians in 1992. 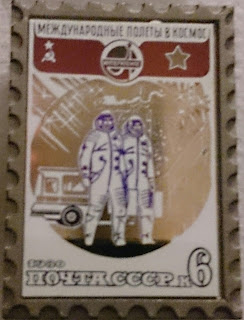 This was an exhibition that thrilled and excited me, as someone who grew up loving this stuff. As a youth I was in Moscow in 1985 and the space exhibitions which I saw then still stick in my mind. At that time it was clear that the local people were very proud of their accomplishments in space, and one man gave me a badge (of a Soviet postage stamp) with two cosmonauts on it, which I love. On that visit I was thrilled to see the "Monument to the Conquerers of Space" statue which was near to my hotel in the "Park of Economic Achievements" as it was known then. The "All Russia Exhibition Centre" as the park is now known just doesn't have the same ring to it. This titanium clad monument of a rocket and its contrail stands 110 metres high, with figures from the Soviet space age depicted on the plinth. Yuri Gagarin is there and out front is a statue of Tsiolkovsky whose early work is well represented in the Science Museum exhibition.

When I went to Moscow with my family 10 years ago the park was a bit shabby, although I understand it has been renovated since. My children were clambering over this glorious monument, staring up to the rocket and to Yuri Gagarin, as many Russian children must have done before them.


Also in the park, between exhibitions on mammoths and the wheat harvest, was a Soyuz rocket, the carrier rocket that to this day still takes crews and supplies to the International Space Station.

So for me the Cosmonaut exhibition re-awakened all of my youthful enthusiasm for space exploration. My (now 16 year old) son also enjoyed it so it is not just for nostalgia that it is notable. The bravery and excitement of the early space pioneers shines through in the exhibition. Just as it is easy to get blasé about computers, the same is true about space exploration as we watch astronauts on Youtube playing in weightlessness today. Space exploration has always been a technology test-bed, and even if the eventual benefits are tangential, we all benefit from it.

In recent years, each time I travel within London by public transport it all goes pear-shaped. Yet again we made the mistake of believing that we could make our way between two points 20 miles apart in the capital in under 2 and a half hours by public transport. What naive fools we were. Surely this must drive anyone living in London to despair. London seems to function more as a clump of overlapping, but not very well connected towns, rather than as a coherent whole. Each time it is a different problem: lines shut for repairs, replacement buses that get lost and attempt three point turns on side streets, signalling problems, "passenger incidents". Londoners, why aren't you all up in arms about this? Nowhere else in the world have I found getting from A to B so unnecessarily difficult.