In France this week politicians and veterans will commemorate the 75th anniversary of the D-Day landings. On 6th June 1944 24,000 Allied forces made an amphibious landing on the Normandy beaches under heavy gunfire. It would take almost another year of fighting before the German armies surrendered to Russian forces in Berlin, but this was an unprecedented operation and deserves to be commemorated.


Like many of us, several members of my family were involved in the war effort. I have written before about my great-uncle who died aboard HMS Glorious when it was sunk in the North Sea and about his sister, my granny, who worked on anti-aircraft guns during World War 2. My great-uncle on the other side of my family also died at sea, working on TSS Athenia. It was sunk in the North Atlantic in September 1939. I have other relatives who were in reserved occupations and worked in Glasgow shipyards throughout the war, at times under German bombs. My great-uncle Peter was a Bevin Boy, conscripted to work in the coal mines in West Lothian. He absolutely hated the work, and was badly injured in a cave-in not long after starting.

My grandfathers on both sides of my family died whilst I was a teenager. My mum's father was a skilled carpenter and spent much of the war conscripted into construction work for the war effort. He spent time building beach defences on the south coast of England, and for a period was doing construction work at Ordnance Factories. He would talk about horrendous nights where they were sleeping beside munitions stores whilst being bombed by German planes. He often recalled one night when a colleague was driven crazy with fear and was running about on the roof of a building shouting at the planes. I suspect if he had been given a gun, my grandad may have tried to shut him up, so convinced was he that this guy would end up directing the bombers towards them.

He was also one of the many people involved in constructing the Mulberry harbours that were used in the Normandy landings, the floating piers used to create artificial harbours at the Normandy beaches for off-loading machinery and men. The parts for these were made all over Britain, including on the River Clyde and at the dry dock on the Forth and Clyde Canal in Maryhill. My grandad was called to Gosport from 9th December 1943 where he worked on building the Mulberry harbours.

On looking through some of his papers this week it is interesting to note the details of his call up papers to Portsmouth. It might be hard to make out on these pictures, but he was to leave Glasgow and arrive in Gosport for 9th December 1943. "This direction continues in force until 5th June 1944". This date may just be a co-incidence, but if you are planning a top secret land invasion of France, which was planned for 5th June 1944 (it was delayed by 24 hours due to the weather) I would suggest that giving the construction workers building your landing wharves a contract which ends when their services are no longer required, due to their work being towed across the Channel that day, does not seem like the best way to keep the date a secret. 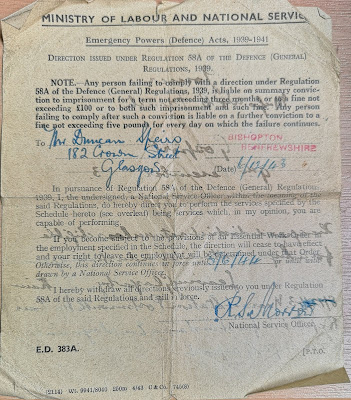 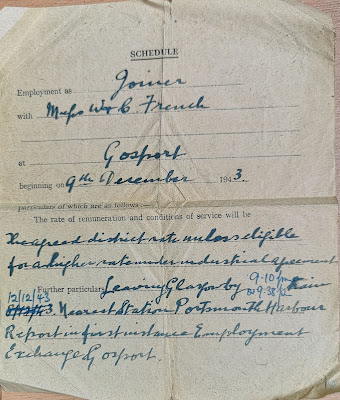 I visited the remains of the Mulberry harbour at Arromanche last time I was in France, checking that his handiwork is still there. Like most things he made, they were built to last. My grandad on my dad's side was one of the soldiers who benefited from these harbours in 1944.


Adolf Hitler and My Family's Part In His Downfall

On the other side of my family, my dad's father enlisted to join the army when he was 24 years old.

As a teenager I became interested in tracing my family tree and asked him lots of questions about his relatives who had fought in World War I, those who campaigned against the Boer War and those relatives that fought in it, and about his cousin who was jailed as a conscientious objector during World War I. I knew that he had been a soldier himself during World War II, and that for a short period he was in Belgium and Germany, but he was never interested in talking about it and I never asked him. Having looked through some of his papers after he died, I have a long list of questions I wish I could ask him now. I am grateful at least that all of my grandparents disliked throwing anything out, and left me lots of photographs and papers for me to try and draw a picture of the events in their lives.

My grandad was born in Kilmarnock in 1915, and the family soon afterwards moved to Parkhead in Glasgow when his dad found work at the iron foundry there. Not long after, they moved to Govan, where his dad (my great-grandad) worked in the Harland and Wolff yard for the rest of his days.

My grandad enlisted in June 1940. His service book records him standing at 5 foot 2¾ inches, and weighing in at 8 stone 11 lb on joining the army. In the 5 years he was in the army he moved about between the Highland Light Infantry, to Royal Army Ordnance Corps (RAOC), to Anti Aircraft Division at Bristol before settling in the Royal Electrical and Mechanical Engineers (REME), being trained as a radio mechanic.

On 11th June 1944 he is measured up for a complete new uniform, and he landed in Normandy on 13th June 1944, 7 days after D-day, on Juno beach with the 11th Armoured Division of the British Army and was then attached to the 159th Infantry Brigade. One of the day 1 objectives of Operation Overlord was to capture the town of Caen, about 9 miles in from the coast. The Germans had committed a large part of their available Panzer divisions to defending Caen, and a bloody and destructive battle ensued, that lasted 8 weeks and flattened much of the city. My grandad had four photographs he had taken in Normandy, and two of these show the aftermath of the Battle for Caen.

His other photographs from Normandy show the badly damaged railroad station at Cherbourg. American forces had taken Cherbourg by June 29th 1944, but the Germans had so badly mined the port that it was unusable for some time to come.His other photograph is of the town of Lison, which lies on the Cherbourg to Caen railway line.

British, Polish and Canadian forces moved north to try to take the port of Antwerp in Belgium to open up shipping routes to supply the advance. This operation (The Battle of the Scheldt) lasted until the end of 1944 before he moved on into the Netherlands before finally crossing the Rhine into Germany. During this period he seems to have managed to enjoy some leave in Paris, which was liberated on 19th August 1944. There is a caricature among his photographs which is recognisably him, with "cartoon from Folies de Bergeres" written on the back. In Normandy winter closes in and he poses for a photo in front of a downed German plane, and sends a greetings card home to Glasgow for Christmas.

In August 1945 his army service book records "8 days POW leave". In online forums the consensus is that this was leave given to people who had been captured by enemy forces for a period of time. However I can find no other clues about this, and it is not something he ever mentioned. He is finally discharged from the army in 1946. The testimonial in his discharge papers records that he had an "unassuming competence. His ability as a tradesman is first class...particularly skillful at work calling for the greatest precision and patience."

Before leaving the army he had met his future wife, my granny. She hailed from Walsall and had spent four years during the war in the army, working on radar at the anti-aircraft guns at Bristol. For their honeymoon in 1947 they spent a week at the Strand Palace Hotel in London (their receipt shows that they paid 6 pence extra per night to have a radio) before they both came to settle in Glasgow.


On this 75th anniversary of D-day I will raise a glass to toast two ordinary Glaswegians, and the part they played in defeating Fascism in Europe in the 1940s.

Posted by Glasgow Punter at 20:55 No comments: