At the end of last year I spent a few weekends running The Fife Pilgrim Way, a new long distance footpath from Culross to St Andrews. I enjoyed the challenge, particularly as it took me away from running my usual jogging routes again and again. So this year, to explore the rest of Central Scotland I plan to complete my run across Scotland, from the Ayrshire coast to the Fife coast at St Andrews.

This middle section takes me from the River Clyde in Glasgow to Culross on the banks of the River Forth.

I started today's run in Maryhill. It is a part of Glasgow that I know well as I grew up here, and played (briefly) for Maryhill Primary school's football team. It is well known as the home of serial under-achievers Partick Thistle Football Club, and less well known that it's named after somebody called Hill, rather than after an actual hill.

Unlike assorted hills of Glasgow, such as Broomhill, Govanhill, Haghill, Dowanhill, Nitshill, Priesthill, Gilochshill and Firhill (among many others), Maryhill owes its name to a certain Mary Hill. When Hew Hill, Lord of Garbraid died without male heirs, his daughter Mary inherited the estate. With the completion of the Forth and Clyde Canal through the estate in around 1790 the land became more valuable, and the village to which Mary gave her name was established. Starting at Maryhill Road outside the Burgh Halls I headed up Lochburn Road towards the canal. Lochburn Park on the right here is home to Maryhill FC, a juniors team founded in 1884. After a couple of years of financial uncertainty they appear to be on a more stable footing after a successful public appeal for help last year. Lochburn Park is the only football ground in Scotland that I have been threatened with being ejected from. Aged about 8 years old, my brother and me were distractedly kicking the harling off a wall there a few decades ago instead of watching the football, much to the annoyance of a club official. Mentally scarred by this incident I have been on best behaviour inside football grounds ever since.


Arriving here at the canal a couple of hundred yards up the road, you will find yourself at Stockingfield Junction. You have the option of turning right and going along past Firhill Stadium towards Port Dundas, or turning left and following the canal towards the Clyde at Bowling, 9 miles away. What I aimed to do was carry straight on and follow the tow path along the canal in the direction of Falkirk and Grangemouth where it arrives at the eastern sea lock. At present, to head along this part of the canal you have to go under the bridge on Lochburn Road, and squeeze against the wall if any cars try to pass while you are under there. (When I ran back up today to take a photograph of it, a McGhee's bread van had got itself wedged under the tunnel in order to emphasise the point for me- see below). To make it a more attractive route planning permission has just been granted for a footbridge to be built over the canal, connecting the tow paths on either side, and creating a wee park on the Ruchill embankment, which is currently a small area of wasteland between Ruchill golf course, the canal and Currie Street.

At the Stockingfield Junction the rusting remnants of a safety gate can be seen. Installed in 1942, this and two other sets of hand cranked gates at Speirs Wharf and at the Firhill Basin, were constructed to allow the canal to be closed at a section where there were few locks. In the event of a German bomb hitting the canal near one of the many aqueducts here, the gates could be closed to minimise the flooding into the Glasgow streets below.

Once you are on the canal tow path it can be a bit disorientating where you are, passing along a green corridor with few reference points to where you are. The canal no longer has any industries using it to ferry their goods about and the long planned recreational facilities along it are few and far between. Along this first stretch Gilochshill is on the left, and Ruchill opposite, behind the council run golf course on the right bank. Sadly Glasgow City Council is threatening to close its six golf courses just now in order to save money. As I used to play regularly as a teenager on Ruchill, Knightswood, and Dalmuir courses (I know that last one is over the boundary in West Dumbartonshire) I will be really sorry if this happens, leaving golf in Glasgow the preserve of people who can afford club memberships and own a blazer.

In the days when horses pulled the boats and barges along the canal, regular stables were required as staging posts to rest and feed the animals. Built in 1815 the Lambhill Stables building still survives, being maintained as a community hub. As well as being a centre for various activities I can recommend it as a place to get an excellent bacon roll and a mug of tea. It is also a good base to start the wee walk around Possil Marsh which it backs onto. A nature reserve and site of scientific interest, if you time it right you may get to see some of the 150 bird species that have been spotted here. The nature treks take you past the site where a meteorite landed here in 1804. If you want to find out more about the meteorite, it is on permanent display at the Hunterian Museum in Glasgow University. 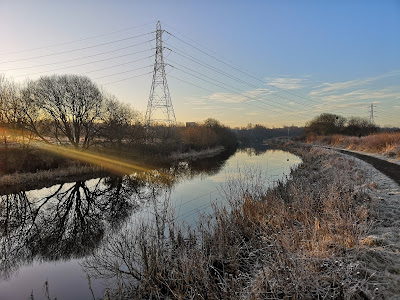 
Passing Possil Marsh and carrying on up the canal you leave the pylons behind and soon head into the countryside on the northern edge of Glasgow. Bishopbriggs and Cadder lie ahead. There are few clues to the former coal and iron mining industries that this area used to support, and miners' cottages previously came down to the banks of the canal. In the photograph below the houses of Mavis Valley would have ran off to the right, which came and went with the mining. Starting with ten houses in 1850, it was home to 270 miners and their families by 1910. When fire broke out in Cadder pit No.15 in August 1913, twenty-two men died underground of carbon monoxide poisoning. Six of them were residents of this village. As mining declined in this area in this area in the 1930s the writing was on the wall for Mavis Valley. The Co-op store here closed in 1952 and in 1955 the remaining houses were demolished.


Just beyond this, continuing along the canal tow path brings you to Cadder Wharf, where a few barges were moored on the day I ran past. Also, after passing no buildings for a couple of miles the surprisingly large Cadder Church looms up on the left which continues to minister to the needs of those in Bishopbriggs and Cadder. Nothing of it remains now, but a Roman fort once stood near here on the Antonine Wall almost 200 years ago. A church has stood on or near this site since 1150, the present church building was completed in 1829. One noteworthy former elder of Cadder Church was Thomas Muir the radical, who was transported to Botany Bay in 1794.

If it wasn't 9am when I was jogging past I may have stopped for a refreshment at The Stables bar, which is found at Glasgow Bridge on the canal, another former stables for horses that worked the canal. This also marks the former site of the next Roman fortlet on the Antonine Wall.

The Antonine Wall and the Radical War of 1820 (aka Scottish Insurrection, aka Radical Uprising) will pop up again as I get nearer to Falkirk.


Kirkintilloch looms ahead out of the mist of this fine winter morning. It is a town I have been back and forwards to over the past couple of years, delivering my children to various clubs and friends. I also used to get the train out here as a student when Woodilee Hospital still existed, but I have never spent any great amount of time getting my head around Kirkintilloch (nor neighbouring Lenzie where the train to Glasgow stops) as a town. The weekend after I ran here from Glasgow I ran the annual Kirkintilloch 12.km race to hopefully see a bit more of the town, only to discover that it starts on the edge of town and finds 10 hills around and about in the countryside beyond the town. Although it was the site of one of the Antonine Wall forts, it was really the industrial revolution that sparked the growth of Kirkintilloch. Weaving developed here, and with the canal and later railways arriving, industries could connect to the rest of the world and locally iron, coal, nickel and even small ships were produced. Iron foundries here produced the famous red British post boxes and phone kiosks until 1984. Like the foundries, the influence of the Temperance movement in Kirkintilloch has also gone. It was a "dry" town between 1923 and 1967, with the sale of alcohol banned on public premises during that time.

The canal basin at Kirkintilloch has been redeveloped in recent times. Until 1945 nearby was the site of a shipyard, specialising in small boats, such as puffers, barges and tugs. Due to the narrowness of the canal, these had to be launched side on. Nowadays a colourful crowd of barges fills the basin, which is overlooked by a new school building and council offices. The annual Kirkintilloch Canal Festival takes place here in August.
For me that was the end of the road, after 8 miles (12.8km), and time to jog up through the mist to Lenzie train station and back to Glasgow. The next section of my run across the country continued along the canal, from Kirkintilloch to Falkirk.


Posted by Glasgow Punter at 17:21 No comments: