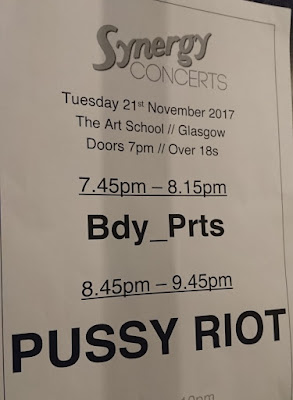 Maria Alyokhina, of balaclava-clad, performance art troup Pussy Riot, spent two years in jail for a 40 seconds long protest in a Moscow church.Also jailed were fellow Pussy Riot members Nadya Tolokonnikova and Yekaterina Samutsevich. Alyokhina has written a book of her experiences with Pussy Riot, and her harsh time in prison (called Riot Days), and this story forms the core of the show, which falls somewhere between being a rally, a gig and a sharp piece of theatre.


She is joined on stage by one-time Pussy Riot bass player, now playing saxophone, Nastya, with her fellow member of Russian lo-fi music outfit AWOTT (Asian Women On The Telephone) - Maxim - providing the electronic musical accompaniment and drums. Looking like the skinhead from the poster of French film Diva, "an actor from Minsk", Kiryl Mashenka, providing shouts, squawks and throws water over the audience when required. The show is produced by Alexander Cheparukhin (who introduced Pussy Riot to the stage with an intentionally Scottish "Pussy RRRRRiot") and Yury Muravitsky.

Before that the visually canny and vowel-averse Glasgow band BDY_PRTS gave us a run through of some of the intriguing music from their forthcoming debut album Fly Invisible Hero. With a look somewhere between Abba and Bjork (is that the Faroe Islands then?) they put on a splendidly entertaining live show.

Much of the media attention which Pussy Riot have received has been focused on their situationalist performances, with it not often being made clear what they were calling for. At times it seemed more like Marlon Brando's Wild One; "What are you rebelling against?", "What've you got?" Performing here in Russian with projections behind them of archive footage of Pussy Riot in planning and in action, and with English super-titles, Alyokhina took us through the story of their protests against Putin's authoritarianism. With Putin's imminent re-election, and his reciprocated support of the Russian Orthodox church headed by Patriarch Kirill (who calls Putin's era a "miracle of God"), they then planned a protest in the Cathedral of Christ the Saviour. Arrest and imprisonment soon followed.

The minimalist music, stomping rhythms, and Alyokhina's strident Russian give the proceedings an energy and pace. The court room re-enactments with prosecution and defendants wearing paper plate masks or the familiar balaclavas, and the descriptions of jail conditions, arbitrary punishments and strip searches provide a window into the Kafkaesque legal system, determined to punish them. Funnily enough, despite all the trials and tribulations they took us through, the sight of two of the performers lighting up REAL cigarettes on stage, in this day and age, was one of the most eye-raising parts of the piece. Rebels.


Pussy Riot were never really a band. Their protests were against what they saw as a patriarchal, authoritarian state limiting women's options and people's rights to protest. 2 years in a Russian penal colony for 40 seconds of dancing in a church with a balaclava on, is brutal punishment. Their future may be limited to book tours and personal appearances, but they still find common cause at times, such as their attempt to shut down Trump Tower last year. Ultimately what they were opposed to held them together, rather than embracing common goals. Their desire to stick two fingers up to authority struck a chord with an enthusiastic Glasgow audience, who seemed to surprise the performers with their cheers as they finished up (joined on stage by Nadya Tolokonnikova for their curtain call).

A fascinating and spikey evening.

Posted by Glasgow Punter at 18:26 No comments: 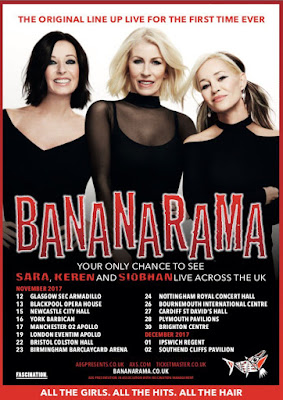 In the 1980s Bananarama produced a string of catchy, finger-clicking songs, which landed them in the Guinness Book of Records as the most successful all-female band in the world ever. They first came to public attention in 1982 as backing singers for Terry Hall, Neville Staple and Lynval Golding's Fun Boy Three hit "It Ain't What You Do It's The Way That You Do It", before the roles were reversed when Fun Boy Three were backing singers on "Really Saying Something" later that year. Despite 32 Top 40 records and chart topping tracks on both side of the Atlantic they always came over as a bunch of pals enjoying themselves.

In 1988 the band came under the direction of the pop music sausage factory that was Stock, Aitken and Waterman, and Siobhan Fahey left the band to enjoy success with Shakespeares Sister. Banararama have continued since then in one form or another with Sara Dallin and Keren Woodward still recording and touring under that name, but 2017 marks the return of the original line up, playing live together for the first time in almost 30 years.

Their short tour has now been extended with some dates in America added, and the UK dates sold out in super-fast time. The crowd were a mixture of the curious and the dementedly enthusiastic, but from the opening bars of "Nathan Jones" we were all on our feet. Among the audience was Bobby Bluebell, one time partner of Siobhan Fahey, whose band rose to fame with a cover of the Bananarama song "Young At Heart". Playing with a four-piece live band the rickety synchronised dance moves were all there, even if Siobhan was off doing her own thing a few times. "Robert De Niro's Waiting" and "Cruel Summer" were the early singalong songs in the setlist, with early demo track "Aie a Mwana" ("it charted at number 92") giving something to the geeky fans. It was a slick and professional performance, all smiles and bright graphics, but they are old enough and wise enough not to take it too seriously and clearly seemed to be enjoying themselves.

With a nod to Siobhan leaving the band, she wanders off stage to the final chorus of "Cheers Then" ("cheers then, we're saying goodbye"), only for her to re-emerge a few minutes later to sing her dark chorus from Shakespeares Sisters excellent "Stay". This time instead of trying to entice some unconscious boyfriend from a coma, the song brings the band all back together (awwww). Sweet.

The show picks up pace in the last four songs with "Venus", and "Na Na Na Hey Hey Kiss Him Goodbye" (a song with an ongoing life as a football chant) finishing off the main set and Fun Boy Three's "It Ain't What You Do" and their own "Love In The First Degree" ending things. It is what pop music is good at, having fun. Did I enjoy myself? Guilty.

Posted by Glasgow Punter at 09:49 No comments:

American experimental hip-hop duo Shabazz Palaces create albums that can appear opaque and intriguing, but performing live present a surprisingly dynamic sound. Ishmael Butler raps and works the electronic gadgetry whilst multi-instrumentalist Tendai "Baba" Maraire brings the energy with his live percussion. Last time I saw them in Glasgow was in a basement bar at the western end of Sauchiehall Street (can't remember which), but now they draw a bigger crowd on a Wednesday night at the Art School.

The films projected onto the screen behind them hint at some of their influences; downtown streets, domestic scenes, Fela Kuti and Sun Ra all featuring. If you can imagine a shiny 1970s American car with Fela Kuti and Sun Ra blasting out from the 8 track, that gets you the flavour of Shabazz Palaces. Their latest albums featuring the character Quazarz comes closest to echoing Sun Ra's otherworldly ideas. You listen to the lyrics, feeling you have grasped the meaning, before it wanders away from you again. Their stories are of a black experience, but definitely at the prog-rock end of the hip-hop spectrum.

The live show is tightly done, with one track sweeping into the next, the two performers in a constant dialogue of sound, and the live percussion just lifts it above the usual. The crowd were drawn in by the gripping show.

Energetic, confusing and intriguing.
Posted by Glasgow Punter at 16:55 No comments: