On holiday this year we were lucky enough to spend a few days in Greenland. Whilst there we stumbled upon a football tournament in the town of Ilulissat where we were staying, a couple of hundred miles north of the Arctic Circle. As an autonomous state within the Kingdom of Denmark, Greenland's football federation, founded in 1971, has not been allowed membership of FIFA. Apparently this is because they cannot sustain grass pitches in Greenland, but after the acceptance of Gibraltar to FIFA and the use of plastic pitches in the recent Women's World Cup, they apparently plan to re-apply. Football is the most popular sport in Greenland, played on gravel or sand pitches in the summer and indoors in the winter.

Greenland is a country with a land mass two thirds the size of India but a population the size of Inverness. 80% of the land is permanently covered in ice with the people living on the ice free coastal areas, particularly on the southwest. The capital, Nuuk, lies here with a population of 16,000. There are no roads between the towns in Greenland with travel really by sea or air. In winter the hardy can travel between towns by dog sled, the only realistic mode of transport in the north of Greenland. 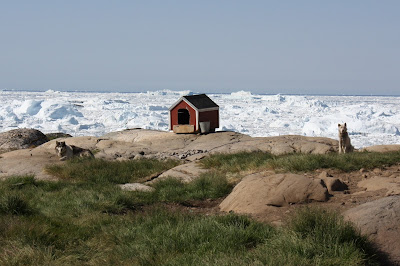 We spent three days in Greeland's third largest town of Ilulissat, a town of 4000 people. The name of the town in the Kalaallissut language means "icebergs". This is because the town is at the mouth of the Ilullisat Icefjord, a UNESCO World Heritage Site. Here the inland Greenlandic glacier moves at 40-50 metres per day pushing icebergs out into Disko Bay all year round. They come down the deep icefjord, where the water is 1km deep then become slowed down in the shallower waters between Ilulissat and Disko Island. Outside of Antartica it is the world's most prolific producer of icebergs and it is thought that the iceberg which sank the Titanic in the north Atlantic started off from here.


The oldest house in town dates back to 1710. Also in town there is a museum dedicated to famous local boy, explorer and anthropologist Knut Rasmussen, in his former house. There is lovely art gallery too, currently run by a Danish man who told us he had lived in Scotland for 6 months as a teenager, working in a tourist information office in Pitlochry. In the town centre across from the stall selling whale and seal meat there is a small brewery and "Murphy's Discotheque", which we didn't manage to visit. The beer from Immiaq Brewery we did however manage to taste and I would heartily recommend it, even their berry and thyme infused beers.


Tourism is now a major employer in the town of Ilulissat, but many people are also employed in halibut fishing and processing. The town has almost as many sled dogs as people living in it and Greenlandic sled dogs first arrived on the island 4000 years ago with the Saqqaq people. 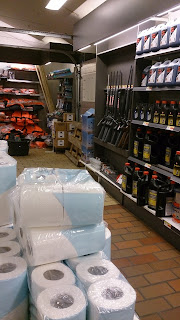 As it is a very old breed there are strict rules in place about what dogs are allowed on the island. The dogs are not pets and can be quite wild, with signs all around telling you not to approach them. Also the local nursery playpark has big fences to stop any stray dogs getting into them. There is no great sentimentality to dog ownership and after about 10 years they are too old to pull a sled and are shot. This is a fate that also awaits any loose dogs which bite someone. Hunting is such a normal part of life in Greenland that we passed several people with a rifle casually slung over their shoulder and rifles were on sale in the local SPAR shop just beside the toilet paper, with bullets available behind the counter, a couple of shelves below the Strepsils.

As travel within Greenland is so difficult the football league has been set up to accommodate this. The preliminary rounds are played regionally with several games over 3-4 days. Then the winners all travel to the capital, Nuuk, to play the final competition over a few days. The current champions have held the title for the past three years, Boldklubben af 1967, (or B-67) from Nuuk. The league championship (or the Coca Cola GM to give it it's correct name, I think the GM stands for Greenland Masters) has been won by the local Ilulissat team 10 times, the last in 2007. They proudly display their 10 stars around their badge on their website. They are called Naqdlunguaq-48, or N-48 to you and me.


Whilst we were in town there were matches played every day at the local pitch, with views to the icebergs floating past in the bay. There was a party atmosphere at the matches, which were obviously a big deal in town, with local people setting up stalls nearby selling everything from home baking to craftwork and old clothes. The crowd were perched up the rocky hillside on one side of the pitch and standing at the small terrace opposite. 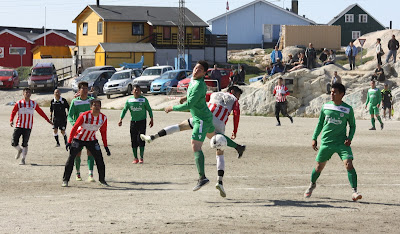 Although I wasn't able to pick out who all the teams were, those playing in green were local boys Naqdlunguaq-48, sponsored by Carlsberg. Worryingly the referee and linesmen also had Carlsberg sponsoring their outfits, which surely creates a potential conflict of interest for them. 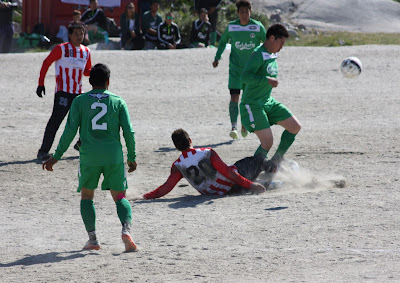 Slide tackles were only for the brave, or those sensible enough not to be just wearing shorts. The hard surface had the advantage that when someone was injured a Toyota truck was able to drive onto the pitch to have him hurled in the back to be taken off, without endangering the surface. 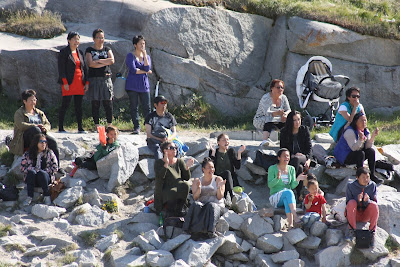 To our surprise the small singing section of women opposite us kept up a chant to the tune of "When the Saints Go Marching In", although as it was in Greenlandic I wasn't able to pick out the lyrics. With their rhythmic clapping it was a whole lot more melodic than anything I've ever heard from St Mirren fans though. 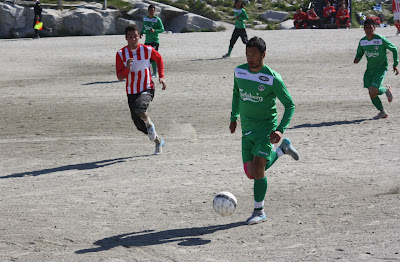 Whilst the match carried on a group of a dozen cars and trucks continually circled the town honking and cheering, with balloons and flags waving in an attempt to intimidate their opposition. I can only presume that the one gunshot that rang out during the match was from a hunter nearby spotting a seal and nothing to do with this. 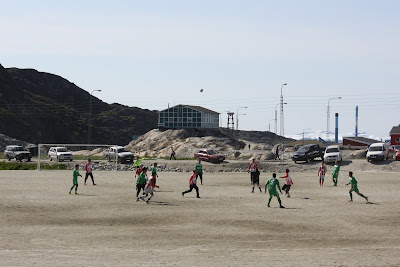 In the picture above you can just about make out the icebergs out in the bay off to the right. Despite this there were clear sunny skies making it a good advert for summer football in Greenland. 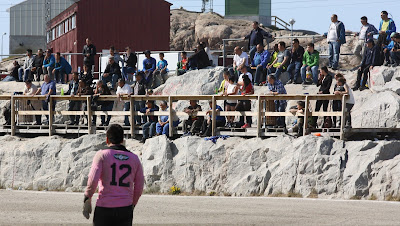 As the next teams got themselves ready Naqdlunguaq-48 ran out winners of the match that we watched, so they'll now be my Greenlandic team to look out for...if there was actually anywhere online that you can follow Greenlandic football. For this reason I apologise entirely for any glaring factual errors in the above, but this was as far as my research could take me. 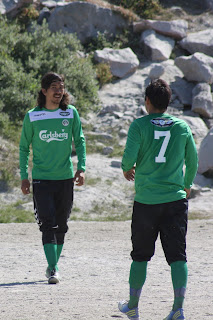 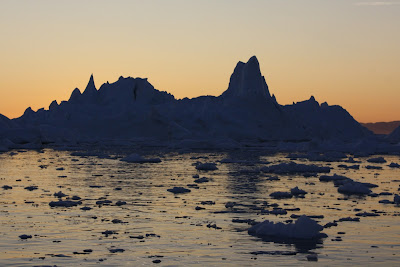 Posted by Glasgow Punter at 22:57 No comments: