Celtic Connections started out as a festival to get bums on seats at the concert hall during the lean winter months after Christmas. It has now grown to become one of Glasgow’s busiest periods of music performance. I am not entirely sure what it is trying to be. It is frequently hard to see any coherent theme or any Celtic connections with the acts. Nevertheless it brings an eclectic range of musicians to the city and there are always some memorable performances.

The festival seems to be spilling out into more and more venues too and it was the venue as much as the musicians that drew me to get a ticket for Kathryn Joseph’s gig at the Charles Rennie Mackintosh designed church at Queen’s Cross. As this building sits just in front of Partick Thistle’s Firhill Stadium I pass it every couple of weeks and it is easy to overlook its charms. The only church which Mackintosh built was begun in 1898, commissioned by the Free Church. This meant it had to be a simple design, but Mackintosh smuggled in lots of clever features and ideas into the building. The sell out crowd for this gig was an echo of the congregation of 820 people that used to squeeze in here every Sunday.

First up was guitarist Gareth Dickson, who has oft taken the stage with Vashti Bunyan. Playing acoustic guitar whilst accompanying himself amongst reverb and delay pedals, he created a floaty atmosphere suited to the church hall atmosphere. Lovely to listen to.

Aberdonian Kathryn Joseph is also a musician who is best listened to. I know that sounds trite, but last time I saw her was in another converted church, at an all day festival in Oran Mor. On that occasion the noisy rabble of people chatting at the bar all but drowned out her voice, despite RM Hubbert getting up to tell them to “Shut the fuck up!”. She had just won the Scottish Album of the Year award for Bones You Have Thrown Me and Blood I Have Spilled, a delicate collection of songs, where many a barb hides in the lyrics. She sings and plays piano, whilst musical partner Marcus Mackay takes percussion. The fact that they share a bottle of red wine between them on stage whilst they play seems perfectly in keeping with the music; civilised and convivial. Joseph held your attention, as she sat side on at the piano, keeping eye contact with the audience. Her mesmeric voice rose to fill the barrel-vaulted roof of the church. An engrossed crowd were held rapt in attention from the opening song, The Bird, almost unaware of the ache in their backsides from sitting on the wooden pews all evening with only a can of San Pelligrino juice from the alcohol-free bar as sustenance.


A physical and musical contrast was provided two nights later in the Glasgow Royal Concert Hall by John Grant, bringing his lumbering frame, gruff baritone and electro-soul-funk thing to town. This is the third time that I have seen him perform now in Glasgow, from an intimate gig in St Andrews in the Square, then the O2 ABC in 2013 and now a sell out night in the concert hall. I am starting to feel like a bit of a John Grant groupie. When I was on holiday in Iceland last year I dragged my family to the wee cafe in Reykjavik that features on the front cover of John Grant's previous album (Mokka Kaffi to be precise - I can heartily recommend it). Unfortunately whilst there I started berating a big German who had jumped the queue, only to find him sat beside me on an uncomfortable flight the next day.

First up was Carrbridge’s “chick with a guitar” Rachel Sermanni. It was a subdued and melancholy set she performed with her band. It would be nice to hear what she can do if she really cut loose and added some vitriol to her singing, but instead she finished on a gentle lullaby.


John Grant performs with a band of musicians plucked from Iceland and Coventry (meaning that The Specials got a mention- yeah!). In front of a guitarist, bass, drums (played by ex-Banshee, Budgie) and keyboard, he alternates between vocals, playing keyboards himself and dancing like a bear wakening from hibernation. He came on stage to the introduction from his latest album, Grey Tickles, Black Pressure, a rendition from Corinthians ("Love is patient, love is kind. It does not envy, it does not boast..."). Much of the set comes from this album, but dips back into Queen of Denmark a fair bit and Pale Green Ghosts (there was also a rendition of an old Czars song Drug). Between tracks he is a veritable chatterbox, even demonstrating his local knowledge to complain about the weather being really "dreichy" in Glasgow. He is a master of many languages but his Scots' vernacular needs a bit more work. He was bemused trying to work out his "Celtic connection", concluding that it is because he is called John William Grant. That'll do.

Disappointing is a track on the new album that I like a lot, partly because of Tracey Thorn's vocals on it, here given a live makeover with Mr Grant and the keyboard player singing together. The smart alec lyrics and arch tone of that song is the kind of twist that makes him an interesting character. He always comes over as a person you could happily spend all night talking to ("The genitive case in German, it's true, is something I'm quite partial to. Rachmaninov, Scriabin, Prokofiev, Dostoyevsky, Bulgakov, Vysotsky and Lev...All these things they're just disappointing compared to you").

As before there is a disco-tinged middle third to the gig, before we settle down for quieter stuff at the keyboard to end. Always chipper, always tinged with melancholy and always good company.

Posted by Glasgow Punter at 20:03 No comments:

Scottish Opera - The Devil Inside

Last night was the premiere at the Theatre Royal Glasgow, of The Devil Inside, a co-production by Scottish Opera and Music Theatre of Wales. Although the name suggests an opera based upon the works of INXS, it is in fact adapted from a short story by Robert Louis Stevenson.

The author of Treasure Island and Dr Jekyll and Mr Hyde wrote the short story "The Bottle Imp" whilst living in Samoa, firstly for a Polynesian audience. Written in English it was first seen in a Samoan translation in 1891, published two years later in English in the collection Islands' Nights Entertainments. The original story, featuring an Hawaiian sailor who buys a bottle containing an evil imp, has been adapted by author Louise Welsh, who wrote the libretto (opera text) for this production. The music is by Scottish composer Stuart MacRae, a contemporary score which is as jarring and unsettling as the story it tells, a good fit.

Louise Welsh as an author can tell tales which start off in a familiar world, then quickly develop into a dystopian Gothic horror. Her last book that I read, A Lovely Way To Burn, has the host of a TV shopping channel heading out on a date at the start, and wandering through a post-apocalyptic world of a viral pandemic by the end. 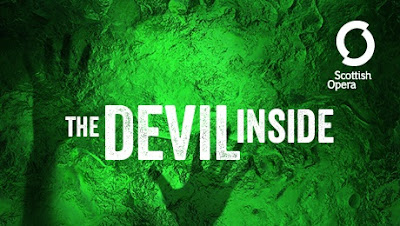 The Devil Inside is performed with a 14 piece ensemble of musicians (partly a practical imperative as the opera will be touring venues of various size after being performed in Glasgow). Stevenson's story has been brought into the modern world. A cast of four performers (plus an almost ninja-like stage crew) tell the story. Ben McAteer and Nicholas Sharratt are young men trekking through mountains when they shelter in a mansion. It is home to a troubled old man (Steven Page) who tells them he got his fortune from an imp in a bottle, which can grant your every wish. However there is a price to pay. If you die in possession of the bottle your soul is condemned to eternal damnation, and the bottle can only be passed on by being sold for less than you paid for it. The price is getting low already and starts to fall further.

A simple but effective staging uses shadow theatre. This can conjure up a contemporary world, with the modern cityscape of the young man's wished for property empire, whilst recalling the Gothic terror of the shadowy figure from the film Nosferatu.

The story batters along and the acting by all on stage is excellent. Any happiness gained through the imp in the bottle is tarnished by it, and when one of the young men finds love with Catherine, played by Rachel Kelly, illness threatens to ruin their happiness. Clever changes like this from the leprosy Stevenson's sailor developed in the original story all work well in this telling. Temptation brings them to seek out the bottle imp again. The story and acting conveys the addiction of those using the bottle, despite the harmful effects that they see (cf. alcohol, drugs, gambling). It affects all of them in different ways which reflects their personalities and a Rorschach inkblot hangs over them, a test used to assess personality traits.

I sometimes struggle a bit with operas sung in English, it just sounds more musical to my ear when you are not listening to the meaning of the words, and just let them wash over you as sounds. So this text, sung in English obviously, has that problem for me. At times it felt like a good play that they were singing to each other. However as the story moved on the music and atmosphere became more immersive and the ambiguities in the ending which the story has been given, gave it a great punchy finale.

Well played, well written. Imaginative and absorbing. I was left thinking it through after going home, greedy for more.

Posted by Glasgow Punter at 12:56 No comments: