Who was George Millar, the Maryhill Martyr?

I've said before on here that to avoid boredom whilst jogging I like to devise wee themed runs to distract myself with (eg a, b, c). After waxing nostalgically last week about my youthful days in Maryhill where I grew attached to Partick Thistle I decided to run around some of my schooldays' haunts. One of my favourite songs being sung at Firhill at present is the old "Oh Maryhill, Is Wonderful" ditty.

I had a quick search on the internet to see what wonders I was unaware of up that way and was delighted to see that the Maryhill Burgh Halls people are adding to their list of guided walks, which I can heartily recommend if you haven't checked them out already. I was aiming a bit further up Maryhill Road, where their walk isn't yet online and searching google was intrigued to find talk of a listed monument I'd never heard of before, a "Martyr's Memorial Pillar". As you can see from the link this is described as a memorial to a "Trade Union martyr", a cast iron pillar at the entrance to the former Maryhill Old Parish Church with a bronze plaque reading:

"TO THE MEMORY OF GEORGE MILLAR, who was mortally wounded at the age on Nineteen on the 24th February 1834, by one of those put to the Calico Printing Trade for the purpose of destroying a Union of the regular workmen, formed to protect their wages. THIS MONUMENT WAS ERECTED BY HIS FELLOW OPERATIVES." 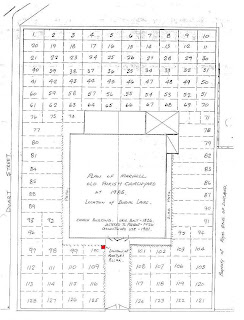 Online I found a plan of the Old Parish Church graveyard which had the Martyr's Pillar clearly marked on it in 1985 (I've made it red for clarity sake) in a piece of land on Maryhill Road at the corner with Duart Street. The church was demolished in 1985 but I hoped that as the monument was listed it was still in place. The old church here was apparently built here in 1826 on land gifted by Lillias Graham of the Garbraid Estate. She was the daughter of Mary Hill who gave her name to the area (her grave is apparently in the necropolis). In 1843 "the disruption" lead to most of the congregation leaving to set up the Maryhill Free Church in Sandbank Street. In the 1970's I was often to be found outside here waiting for a "scramble" at weddings or playing football in the wee pitch behind it after my friends had come out of the Boys Brigade which took place in the church hall in the evenings here, as I lived about 50 yards away. In the 1920s the churches re-united with the Sandbank Street one becoming "Maryhill High" and the old one on Maryhill Road becoming "Maryhill Old". In 1986 the two churches were merged together into a new non-descript building further up Maryhill Road. The one on Sandbank Street was sold off and is now a nursery and a private house (when I passed today they seemed to be working on the fine old steeple).

The Old Building returned to the Garbraid Estate heritors, was apparently vandalised, declared unsafe and demolished after over 160 years of use. On 13th March 1941 during the Clydebank Blitz a landmine fell behind the church in Kilmun Street and damaged it (have a look at this painting in the National Galleries of Scotland), but the building survived until the usual mysterious Glasgow building ailment occurred of neglect, vandalism, declared unsafe/ mysterious fire, then demolition. Is there a city anywhere in the world more negligent of its heritage?

On my run this afternoon I went up past my old school, Maryhill Primary on Viewmount Drive, officially the highest street in Glasgow. It turns out it closed down in 2006 and after several years of the usual neglect or "anti-social behaviour, water damage and pigeons" it was "at serious risk of being lost".  I was surprised to see that the school and its enormous playgrounds have now been re-developed as flats.

After the church was demolished the graveyard transferred to the "care" of Glasgow City Council who are apparently awaiting resolution of legal issues before tidying it up. From what I saw there today, they'd better hurry up or there won't be much left to tidy up.
﻿﻿﻿﻿﻿﻿﻿
﻿﻿﻿﻿﻿The first picture shows a wee corner of the graveyard where some people seem to have made themselves comfortable, the second picture is looking straight at where the door of the church used to be. So there is no memorial here to George Millar. This is the description of it from the church records. "An unusual iron monument, with cubic base and tapering pillar surmounted by an urn. On the base a bronze plaque, heavily painted over."

So who was the "Maryhill Martyr" and where is his plaque? Has it been turned into scrap at the time of the demolition? I found the answer to the first question in an old book from 1895, charmingly titled "Random Notes And Rambling Recollections Of Drydock, The Dock Or Kelvindock, All Now Known By The More Modern Name Of Maryhill" by Alexander Thomson. Dawsholm Printworks started linen printing in 1750. A row of houses to accommodate the workers on "Bridge Street" was one of Maryhill's earliest parts "known as the Botany since the beginning of the 19th century". As the book goes on to say "the rules and customs in printworks at that time were of the most oppressive and tyrannical kind, and had a most demoralizing tendency."

In 1833 when employers refused to meet the demands of the Workmen's Trade Committee on pay and ratios of journeymen to apprentices a strike was called. The employers responded by dismissing their unbound apprentices and journeymen, and employed young men ("nobs"), women and girls to take their place. Due to "molestation of these nobs" some offenders were sent to prison and using plans akin to those later taken up by the late Margaret Thatcher, soldiers were brought from the Barracks to guard the "nobs" at Dawsholm Printworks. One 19 year old block-printer, George Millar, was stabbed one evening on the Botany, allegedly by a nob called Clay Davie (no, not the knob from The Wire called Clay Davis). After allegations of "golden ointment being placed on the hands of witnesses to blunt their memory" the accused was discharged.

So where is the plaque? I contacted local historian Ian Mitchell who tells me that at the time of the demolition it was apparently taken into the care of Glasgow City Council. The hope is that it can be installed in the newly restored Burgh Halls. I hope that this is the case and we don't forget young George Millar, the Maryhill Martyr.