The Tectonics Festival started life in Iceland, and has been playing in Glasgow for several years now under the leadership of conductor Ilan Volkov. As in previous years the BBC Scottish Symphony Orchestra are at the heart of the Tectonics performances, but are accompanied over the weekend in the Old Fruitmarket and Glasgow City Halls by a parade of modern classical and experimental musicians, composers and performers. Tectonics has now become a brand, with their diverse festivals of new music performed now in New York, Adelaide, Reykjavik, Tel Aviv as well as Glasgow's annual shindig. 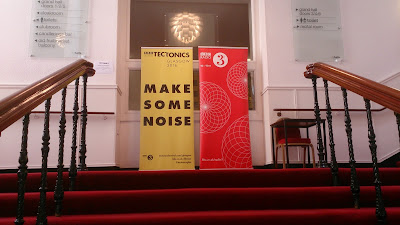 As in previous years, the interconnected venues of the Old Fruitmarket and City Halls were fully exploited, with performances ebbing and flowing between spaces and on many occasions designed with the space in mind.  Over the weekend pianist and improviser John Tilbury was present, marking his 80th birthday earlier this year. He opened proceedings in the main hall, playing piano on Annea Lockwood's Jitterbug, a quiet piece based on underwater recordings, with the musicians interpreting a score consisting of photographs of patterned rocks. A typically leftfield and experimental piece for Tectonics. This was followed by an engaging piano duo from John Tilbury and Sebastian Lexer, starting with Unintended Piano Music, a tribute to Cornelius Cardew, before they improvised back and forth. A low key start to a festival which has "MAKE SOME NOISE" proclaimed on its posters and on the wristbands we are all wearing.

Heading into the darkened space of the Old Fruitmarket the volume picked up a bit with Ane Unquietatioun, a collaboration with modern folk singer Alasdair Roberts, Trembling Bells drummer Alex Neilson and improviser and multi-instrumentalist Ivor Kallin on viola and squawking vocals. They produced an intriguing blend of Scottish folk and free jazz.

Angela Rawlings and Rebecca Bruton (Moss Moss Not Moss) engaged in a melodic, Socratic vocal dialogue on a pedestal in the centre of the hall. Between performances Annea Lockwood's installation A Sound Map of the Housatonic River played in the Recital Room, a soothing hour of field recordings.

As we entered the evening the BBC Scottish Symphony Orchestra got their first outing, starting out spread around the Fruitmarket hall playing a "spatial piece" by Catherine Kontz, taking its name from the hall, echoing the calls of market vendors. It was hard for me not to think about the "Fresh strawberries, fresh" opening calls of Who will buy? from Oliver Twist (as a child this was my song at family parties).

Four further orchestral pieces in the Grand Hall were more noteworthy for the spaces and noiselessness between the music than for soaring drama. At times some felt like a series of short pieces of incidental music from an ITV series. Concealed Unity by Jessika Kenney and Eyvind Kang, which had members of the orchestra and the Glasgow Chamber Choir dotted about above and behind the audience on the balcony of the hall, was the most memorable.

Back into the Old Fruitmarket for the late gig brought the most intriguing performances of the day. Andy Moor of Dutch outfits The Ex and Dog Faced Hermans was joined by Wilf Plum, Jer Reid and Neil Davidson on guitars and drums and Anne-James Chatton with a monotone, French vocal, taking us through a cycle of songs based on Dante's Inferno. They gave us a classy performance and a classy sound.


On an unusually sunny Glaswegian day, we started off day 2 in the cool dark of the Old Fruitmarket again. Jon Rose is a violinist, but definitely not in the traditional fashion. With Palimpolin he gave us a gripping, virtuoso performance showing the astonishing sounds a violin can be made to produce. Spotlit in the dark at the other end of the Fruitmarket hall we then had Labyrinthine by Jane Dickson, an abstracted operatic piece for two voices (Lucy Duncombe and Anneke Kampman) above an electronic drone. At times it sounded like a Gothic children's playground, as they jumped and sang for short periods with looped vocals. It was hypnotic and atmospheric in the inky blackness of the Fruitmarket.

More concentration and effort was required of the audience next in the Grand Hall for Michael Pisaro's Lucretius Melody, based on The Nature of Things, a work of Roman poet and philosopher Titus Lucretius Carus. With voice, viola and guitars it felt quite medieval in tone, serene and unhurried. After this Alvin Curran was next up to shake the cobwebs away.

The distinctive skirl of three bagpipers started Alvin Curran's work, Musique Sans Frontieres, in the foyer. Accompanied by saxophonists and Alvin Curran on a shofar or horn the audience were led through the building and into the Fruitmarket where brass, woodwind sections and a choir were awaiting us. The next phase started with the crashing drums on the balcony, the music swinging from chaos to order under the guiding hand of the composer. The chorists and musicians mingled with the audience, throwing frying pans to the floor as they went before we were led by them back to the Grand Hall where the full BBC SSO took over on stage giving us a lustrous and warm end to the piece. Of particular note were the solo violinists of the BBC SSO, particularly the fiddling finale. Also the Glasgow Chamber Choir and the Kirkintilloch Brass Band who were involved gave a sterling performance and rose to the challenge of the work.

A hard act to follow, but Alwynne Pritchard's piece Rockaby, had enough theatricality to manage it. Blurring the boundaries between music and drama, elaborately costumed and accompanied by the orchestra and an extensive table of sound effects it was inspired by the Samuel Beckett one-woman play of the same title. Michael Pisaro's fields have ears finished events in the Grand Hall on a tame note, with the orchestra subdued and quiet. John Tilbury performed the suppressed piano solo above rustling paper and tickled cymbals. It left a feeling of anxious anticipation with its exploration of the sound of silence and space reminiscent of John Cage, but rather deflated the earlier energy in the room.

The closing concert in the Fruitmarket was as eclectic and diverse as you would hope. David Fennessey's 16 musicians playing strings had part of the audience kettled between them as they passed the melody back and forth. Then we had the "yoiking" of Ánde Somby, animalistic chants from the Sami people that definitely showed the hand of Alasdair Campbell in curating the weekend.

The finale was one of my favourite pieces of the whole weekend and I would happily have listened to more of Nate Young's electronic noodling in front of an ensemble of 12 BBC SSO musicians, performing Mario Diaz de Leon's Standard Deviance One. To the end Ilan Volkov was on stage conducting this last piece with the energy and enthusiasm he shows all the time in curating and organising these events. When he is not on stage he is amongst the audience helping give these Tectonics festivals their unstuffy and relaxed atmosphere. The venue helps too, as do all the staff working in it, and this year the spaces were exploited fully by the composers.