"History in the Making" - Ricky Burns vs Michele Di Rocco

The SSE Hydro has always looked like the perfect stage for professional boxing contests, and last night it was the venue for local favourite Ricky Burns's attempt to claim his third world title. He was the headline act on a night of boxing laid on by Eddie Hearn's Matchroom Boxing organisation and shown live on Sky Sports. The 10,000 seater arena has good views from every seat in the house and can create a great atmosphere when the entertainment is right, with the seating banked up steeply on three sides.

The Hydro has been used for boxing once before, when it was home to the boxing events at the 2014 Commonwealth Games. I saw some of the finals here and was very impressed with the organisation and the performances. I enjoy watching boxing on TV but have rarely went to see professional bouts. When I have bought tickets recently the events have been cancelled at short notice for various nefarious reasons. Prior to that I have taken in the odd evening of amateur boxing in Glasgow, which can be anywhere from the Fairfield Working Mens Club in Govan to the function suites at Hampden Stadium. With the demise of the Kelvin Hall as a sporting venue, where Benny Lynch and Jim Watt have previously fought, the Hydro has been a welcome, and well used, addition to the city's venue options. As a child I remember our annual trips through to Edinburgh for the Miners' Gala, where one of the most memorable events was the big tent in Holyrood Park hosting amateur boxing bouts, so I was looking forward to this night.

The big problem faced by professional boxing is that those running it are all in it to make money for themselves. Why else would there be so many championship divisions with WBA, IBF, WBC and WBO champions on the go at present? Then you can get "regular" and "super" champions of some bodies to add to the chaos. Promoters cherry pick fights their man is likely to win in order to guarantee the next payday.  It is a big turn off for many, and you watch so many fights unsure if you are watching a true contest, or some fall guy stepping in to make someone else look good.

At end of all this, a successful boxing career, such as Ricky Burns has had, can in end in bankruptcy and contract disputes with promoters. After slowly rebuilding his career after splitting from promoter Frank Warren, Ricky Burns, now promoted by Eddie Hearn, has stepped up a weight division to try to grab the vacant WBA World Super-Lightweight title. The "History in the Making" tag is to mark this achievement, as it would make Burns a three-weight world champion, having previously held Super Featherweight and Lightweight titles.

With the main fights of the evening going out live on Sky Sports, the boxing was listed as starting at 5.30pm with a preposterous 12 or 13 fights listed to go ahead. For the majority of the early bouts, they played to a sparsely filled hall. Joe Ham taking on Paul Holt drew more punters away from the bars, fighting 6 x 3 minute rounds at bantamweight. In his eighth fight since turning professional after the 2014 Commonwealth Games he took a comfortable points victory. The personable Glaswegian has been a regular supporter of the campaign to build a statue in the city to honour Benny Lynch and is building up an impressive record of victories now.


More of a brawl came from former British Champion Jon Lewis Dickinson and Belfast's Tommy McCarthy with McCarthy emerging on top after 10 x 3 minute rounds in a British Cruiserweight Championship eliminator. Evenly matched at the beginning, McCarthy began to pull ahead and won by a unanimous decision as he makes steady progress in the division.

Conor Benn, son of Nigel Benn, fought his second professional bout high up on the billing, a workaday four round fight against Halifax's Luke Keleher. Clearly the promoters trying to build him up, but it was a shame Charlie Flynn wasn't given the chance at this point on the night to fight in front of a big home crowd.

Scotland's Willie Limond has been boxing professionally since 1999 and the 37 year old was intent on having one more big title push. His hope as stated in the programme, was to take the British Super-Lightweight belt from Tyrone Nurse tonight, aiming to set up a world title fight in Glasgow later this year against Ricky Burns if the pair of them ended up victors on the night. The crowd were getting right behind every punch he threw in some lively early rounds, despite a large section on the floor of the hall being distracted by trying to get selfies with American Heavyweight Shannon Briggs who ambled into his ringside seat during the first round.

Limond seemed to run out of steam as the fight went on and it was stopped in the ninth round when the referee decided that he had had enough punishment from the reachy Tyrone Nurse. After a long and impressive career, it may be time for Willie Limond to hang up his gloves.

There were still three fights on the undercard to be fought when TV schedules required us to skip to the main event, Ricky Burns vs Michele Di Rocco. The 34 year old Italian, recent European Super-Lightweight champion has an impressive record with forty victories and only one defeat, and is more comfortable at this weight than Burns, making him slight favourite in some people's eyes. The hope of many in the home crowd was that they could help push Burns onwards to victory. 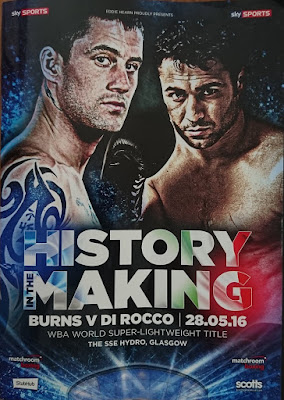 The hall was full by the time the ringwalk started for the Burns vs Di Rocco fight and it was clear this would be a partisan crowd. It was also clear that signs of some "over-exuberance" were breaking out all around the arena before a raucous and shambolic rendition of "Flower of Scotland" was bawled out by the crowd in the Hydro.

Ricky Burns rolled back the years to put on a performance that he has previously shown he is capable of, as he went at Di Rocco from the first bell. With an impressive performance, his jabs repeatedly hit home and the lively crowd were lifted to their feet from early on. The Italian looked as if he was taking it though until he was knocked to the floor in the eighth round. Although he got back to his feet he was clearly in no state to continue and the referee brought it to an end.

It was an imposing performance and makes Ricky Burns the first Scottish boxer ever to have won titles at three weights. As we approached midnight I headed home with most of the audience, with chants of "Ricky Burns...Ricky, Ricky Burns" to the tune of KC and the Sunshine Band's Give It Up echoing out. Three fights, including Scottish Commonwealth Lightweight Champion Charlie 'mailman' Flynn taking on Pole Norbert Kalucza were still to come in an emptying hall, which seemed incredibly unfair on the boxers promised their arena exposure. Charlie Flynn later won his eighth professional fight, on points.

On a night like this with a partisan crowd there can be a great atmosphere at the boxing. However early in the night the hall was almost empty and later on a decent proportion of the crowd were marockyoolusly drunk. Obviously fights can have varying lengths but the programme was always fairly fluid as we danced to the tune of TV audiences, and seemed cobbled together at times. As a result crowds of people ebbed in and out between the arena and the bar as we waited for the headline act. A leaner, meaner line up may have helped engage the crowd in the hall but I guess we are just window dressing for the TV audience. The people sitting around us were absolutely pished by the end of the night. As one guy with a mop cleared up vomit a couple of rows in front of us another group beside us seemed oblivious to the fact Ricky Burns was fighting down below us. They fell back on the only tunes they could think of to shout as a crowd "Waghorn's on fire, your defence is terrified" and "Fuck the IRA" and thankfully headed off before the fight finished.

Many people were here for a night out, rather than for the boxing, which is fair enough but the stewards were clearly being kept busy by scuffles threatening to break out here and there. At times it was just as entertaining to watch the audience as to watch what was going on in the ring. However there are few venues that you can get away with that level of drunkeness and not get ejected.

It was an excellent night of boxing, but I'm not sure that having a vague feeling you might get lamped if you looked at someone the wrong way added much to an excitable atmosphere. With that and the dolly-birds tottering around between rounds with the the cards above their heads, it feels like boxing needs to raise its game a wee bit and come into the 21st century. It is an expensive night out, and the amateur boxing at the Commonwealth Games was laid on in a much more professional manner. It was better organised, had a sharper schedule, big screens above the ring to help watch the action and MCs talked to the audience, rather than spending all night with their back to you as they faced the TV cameras with you as a backdrop.