Ghost Signs of Glasgow, The Fading Works of the Signwriter


When I'm out jogging I pass many old, fading shop signs or "ghost signs" as they are known, slowly vanishing into obscurity. Despite the wee insights into another era that these give they are rarely afforded any protection, which probably adds to their charm. You still see old signs in several places. You see them above pubs, where old signs are remade, as if they are unchanging. You see them on Italian cafes (eg Jaconelli's at Queens Cross) where the faded art deco signage has almost become their calling card. Also now you see them on some bars and cafes where old battered signs which they have uncovered in the course of renovation works are kept to add a "quaint" ambience to a place.

However in most cases these signs are uncovered briefly in the course of building work and then covered over again with a bland, disposable plastic sign. The best collection of old signs put to good use in Glasgow is surely inside the Old Fruitmarket, where the stallholders signs from the market days hang from the balcony.

Sign writers and gilders were important and skilled tradesmen in the days before adverts could be mass produced on posters and signage printed cheaply on plastic hoardings. Gilded street signs and their distinctive fonts seem a million miles away from our uniform modern ones (even the olde names are better).


Part of the appeal of these old signs is the fact that they are passing, like the sentimental nostalgia you feel on seeing someone's naff decor revealed high up on the wall of a half-demolished building. They recall shops and trades that no longer exist and seem to have some charm and individuality. Nowadays it is often felt that the rows of shopfronts in one town can look exactly the same as every other streetscape in the land.

Two of my favourite ghost signs in Glasgow are the barely visible "Capstan" sign beside the Brazen Head pub in the Gorbals and the "Red Hackle" advert high up on a building on Otago Street.


Capstan cigarettes were produced by the Wills tobacco company, a company originally founded in 1786 in Bristol, trading tobacco from the colonies (see blog on Glasgow's tobacco merchants). Other brands which they owned included Woodbine, Strand cigarettes and Gold Flake tobacco. In 1953 Wills opened a cigarette factory on Alexandra Parade where my uncle worked for a time, this factory continued churning out cigarettes until it closed in 1990.

In 1971 when tar and nicotine content of cigarettes was first published in the UK, Capstan cigarettes had by far the highest content. For 10 years I drove under this bridge on my way to work and depending on the lighting that day, I could usually see the words "CAPSTAN cigarettes" shining out at me as I sat at the traffic lights. The railway bridge at Cumberland Street in the Gorbals is near to where my gran and grandad lived as children. There is barely a photograph of my grandad without a cigarette hanging from his bottom lip, so I imagine this Capstan advert he must have passed a thousand times as being aimed directly at his teenage self.

Today when I ran past to take a photo of the bridge it is now almost impossible to discern the old writing, particularly as some latter day artist has scrawled (I think) "TOGS....SOO" across it. (Young Sooside Cumbie? Anyone?)


The building now at 37 Otago Street in Glasgow is home to the Rug Rooms flooring company amongst other things, including a Sikh temple.


However if you look up at the gable end of the building from Otago Street you can discern two versions of the words "Red Hackle" painted over each other and perhaps a whisky bottle on the right hand side. What you won't be able to see are the words "Scotch By Tradition" at the bottom (which is visible in the old photo below). This building is sometimes referred to as "Kelvin House" or the "Red Hackle" building. It was built between 1887 and 1897 as a warehouse for P Hepburn, "wholesale cabinetmaker and upholsterer" but in 1920 Charles Hepburn and Herbert Ross founded Herbert and Ross Whisky Blenders Company and the building came to be their premises for Red Hackle whisky blending and broking. The two men had both served in World War 1 and had a policy of employing ex-servicemen. The "Red Hackle" that gave their whisky its name is the red feather on the headdress of the Black Watch Regiment.
If you look at this old photograph above you can see two tunnels on the right hand side underneath a small building - this is clearer in the picture below. This was a train station on the Glasgow Central Line, if you follow it from here onto the other bank of the River Kelvin, you'll soon come to the old train tunnels at the entrance to Kelvingrove Park, where they used to hold raves in the 1990s. Going the other way underneath Great Western Road the next old train station is in the Botanic Gardens, then at Kirklee. The station is clearer in the photo below, although obviously in a state of neglect. The Kelvinbridge Station was close to Kelvinbridge Subway Station and opened in 1896. It closed to passengers 56 years later and to freight in 1964. As is often the way in Glasgow with inconvenient old buildings, it was destroyed by fire in 1968. 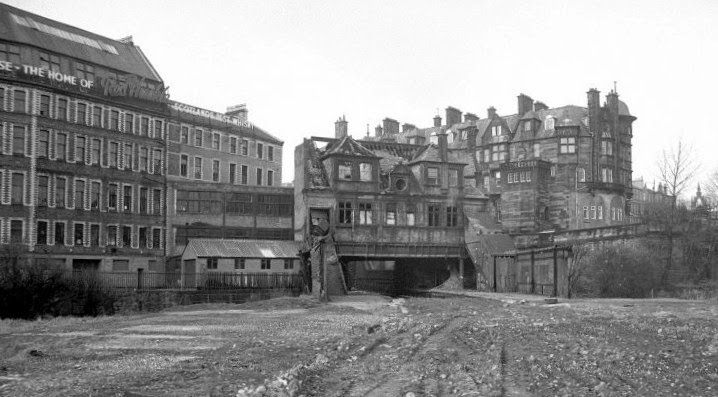 When I went past to try to copy the old photograph above of Kelvinbridge Train Station today it was almost impossible to see it through the leaves on the trees. It sits down beside the River Kelvin beside the beer garden of the Inn Deep Bar. However the gate over the entrance to the old tunnel was unlocked today, so I went inside to have a nosey. It was pretty dark, but the short station platforms are still there and a flight of stairs leading upwards to the old station. There are loads of these old train stations in Glasgow, hidden away.

Charles Hepburn, who owned the whisky company, donated the premises across the road on Otago Street to the new Piping School and financed the "Red Hackle Pipe Band". He lived at 7 University Gardens and bequeathed this house and a large part of his valuable book collection to Glasgow University upon his death. He had a major art collection too, and it is known that he got his signwriter to create copies of some other famous artworks, such as The Laughing Cavalier, for his house.


Unusually we are able to put a name to the man doing the signage here at Red Hackle. Alex McGregor was born in Glasgow in 1910 and in 1927 was awarded "Apprentice Of The Year" after completing his apprenticeship as a painter and signwriter. He later studied at Glasgow School of Art on a part-time basis. 20 years later he was employed by Charles Hepburn as the whisky company's signwriter. He was installed in the top floor at the Red Hackle building on Otago Street, the skylight windows here giving him a great studio space overlooking the River Kelvin. When the building was refurbished in 1952, a rather odd baronial-style entrance hall was created. If you go into the Rug Rooms showroom you can still see it, and on the roof of the hall Alex McGregor was commissioned to paint shields depicting the clans of Scotland. He also painted a frieze of famous Scots around the wall of Charles Hepburn's office, which suggests he was very familiar with the one in the National Portrait Gallery in Edinburgh. Shortly after completing this work, Mr McGregor sadly had a massive heart attack and died, aged 42. I guess it stands now as an opportunity for us to view the skills and abilities the men who created these now fading adverts and signs really had.

So for Alex McGregor all the other sign painters of Glasgow here is a random selection of their works that I have spotted on jogging through the streets of Glasgow this past week or two. 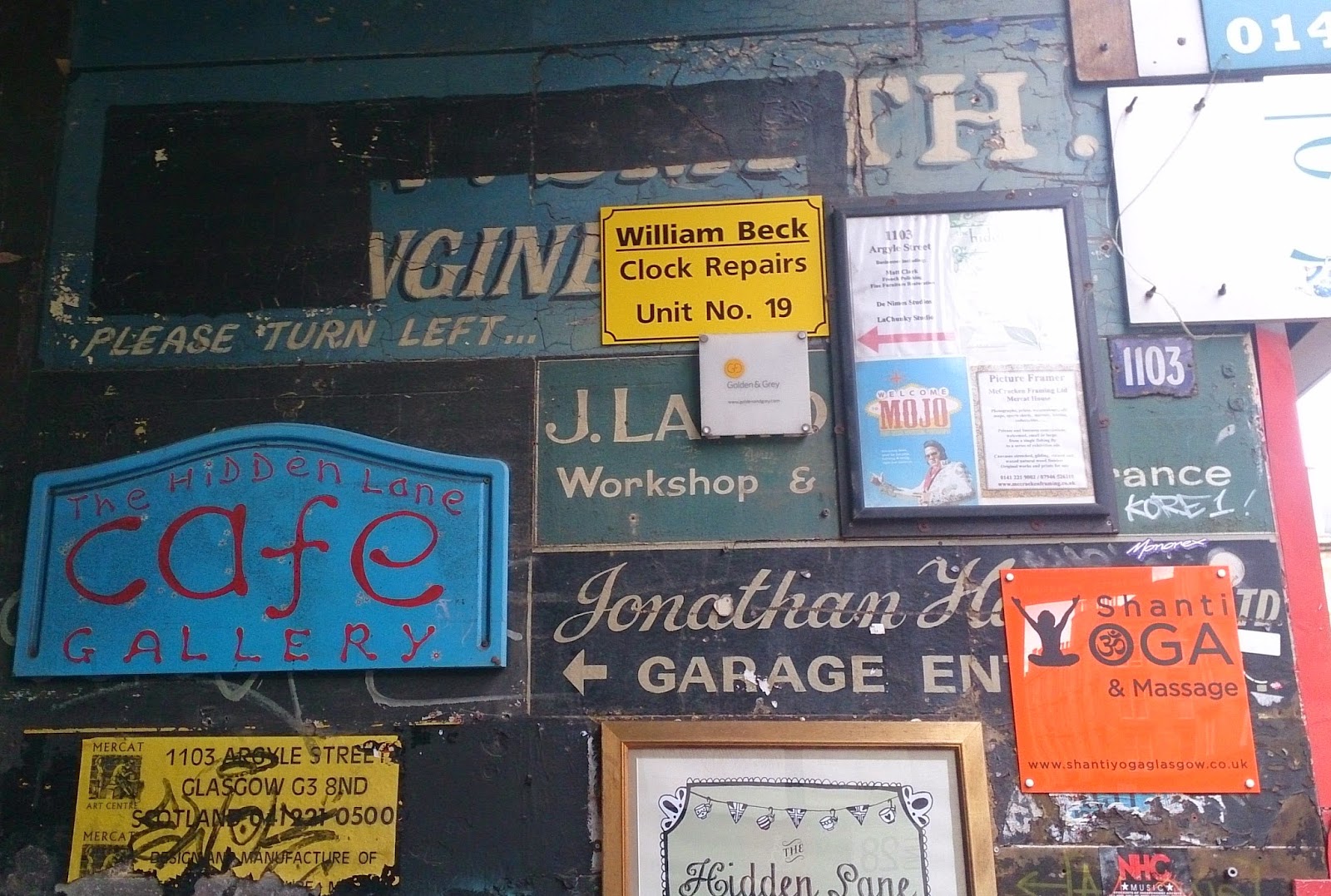