I don't know Alasdair Gray but I feel that I should as he has been such a familiar sight in Glasgow for many years.

I've seen him at things. I've been to events that he has been involved in, and heard him talk at events I've been to. I've heard him talk about Scottish Independence, about books and about nuclear war. I've been to events where he was meant to be talking, but had nodded off and nobody wanted to wake him. I've been enticed into buying other people's books for his illustrations. I've walked over floors with his murals upon them and sat in bars with his murals adorning the walls. I've read and enjoyed some of his books and read and not enjoyed some of his other books. In September 2012 I came up an escalator to find myself amidst Nicola Sturgeon's official "opening ceremony" of his mural at Hillhead subway station. (They were kind enough to let me duck under the red ribbon to escape before they cut it.) He is literally and metaphorically in with the bricks of Glasgow.


Just taking a few minutes to ponder what I think about Alasdair Gray makes me think of the diverse things that he does. Brought up in the east end of Glasgow he went to Glasgow School of Art where he spent 4 years training in mural making. His distinctive novels usually have the author's hand not only in the story but in designing the typeface and layout, with pictures and words coming together to tell the tale.

On my shelves I've got novels, short stories, some history of English literature, a play, an essay on "Why Scots Should Rule Scotland", pictorial autobiographies and an illuminated book of Scottish song. They are all instantly recognisable from his style which is often described as being inspired by William Blake and Hieronymus Bosch but also has elements of his childhood readings of the Beano and the Dandy where, according to a video interview on show in Kelvingrove at present, he became familiar with the idea of words and pictures telling a story together.

Characters and ideas are often remembered and reworked in other places, such as Bella Caledonia who is first seen in the book Poor Things in 1992. She also appears on the ceiling mural of Oran Mor, has become the symbol of an online magazine since 2007 and an illustration for the First Minister's Christmas card in 2011. The Christmas card artwork is now on display in Colin Beattie's Granny Gibbs pub in Whiteinch. The Hillhead illustration adorning the walls of the subway station on Byres Road is adapted from an illustration in the book Old Men In Love.

As he celebrates his 80th birthday this year, Alasdair Gray says in an interview on show at the Kelvingrove exhibition "Oh dear, I'm becoming popular in Glasgow. I never expected that in my lifetime."

To mark his birthday there is currently an "Alasdair Gray Season" running in Glasgow. At present there are exhibitions on at the Glasgow Print Studio in the Trongate (for free) and in the basement at Kelvingrove Art Gallery and Museum (for £5). Later there will be linked exhibitions within the Gallery of Modern Art and the Glasgow School of Art looking at his "Spheres of Influence".

The Glasgow Print Studio exhibition is titled "A Life In Print and Posters". This includes numerous old posters for plays and the like, which he has produced over the years at the Print Studio as well as showing draft versions of some of his prints to illustrate the process which he goes through. There are also early written pieces, produced by the Print Studio's old literary wing, Print Studio Press, such as his "The Comedy of The White Dog". Screenprints of illuminated poems which have more recently been on display here also line the walls but for me the highlight was seeing a series of new screenprints he has produced, based upon the artwork of his most famous book, Lanark. Some of these, the title pages of the four "books" of Lanark are versions of classic title pages from Versalius's anatomical book De Humani Corporis Fabrica, from Hobbes's Leviathon, from Bacon's Novum Organum and Raleigh's History of the World.  Each is given his individual twist, such as the Glasgow University logo appearing in one and James Kelman's face in another and these new versions are great to see (view here).

Lanark, the book, is now regarded as a Scottish classic. Published in 1981 it tells the parallel stories of Duncan Thaw in Glasgow, and of a young man called Lanark in a Glasgow-like town of Unthank, with Kafkaesque oddities and twists. I read and enjoyed it years ago now, but seeing the new versions of the prints has made me dust down my copy and give it a go again.

The exhibition in the basement space at Kelvingrove Art Gallery is titled "From The Personal to the Universal". Excellently curated by Sorcha Dallas who continue to represent Alasdair Gray, it is a retrospective of his work from his schoolboy art classes in Kelvingrove galleries, to the present day. As is often the case with many of his works, some are listed as unfinished as he often goes back and alters and colours old works. From his earliest works on show here he really grabs the attention. In the first room a piece from his student days in the Glasgow School of Art of the "cutty sark" episode in Tam O'Shanter show his already developing distinctive style.

A room of seemingly simple portraits belies the attention to small detail contained within them. In one, which is only shown as a photograph, of Scottish Nationalist and Socialist Bill Skinner in his Otago Street flat in 1968, if you look closely a fire can be seen outside his window. This is the old Kelvinbridge train station burning down, which I had only read about a week before. This attention to documenting detail was picked up on by Elspeth King when she commisioned him as "city recorder". Whilst curator of the People's Palace in Glasgow in the early 1970s she was aware that it contained no scenes of Glasgow or its people from its more recent past. There is great pleasure to be gained by spending some time looking at the detail he got into these drawings. Whether it is the ticket stubs collected from a typist's handbag when she was sketched on a break from work or the shop hoardings, crumbling buildings or a motorbike in the background of a drawing of Arcadia Street. Some of the best are of Glaswegians he knew and he documented their lives with great insight such as poet Tom Leonard, union leader Jimmy Reid both pictured with their families or of James Kelman, with his influential bookshelves behind him.

Several of his own self portraits are seen here too, a familiar sight in many of his books, often with the artists' hand still drawing in the style of Escher's hands drawing each other. 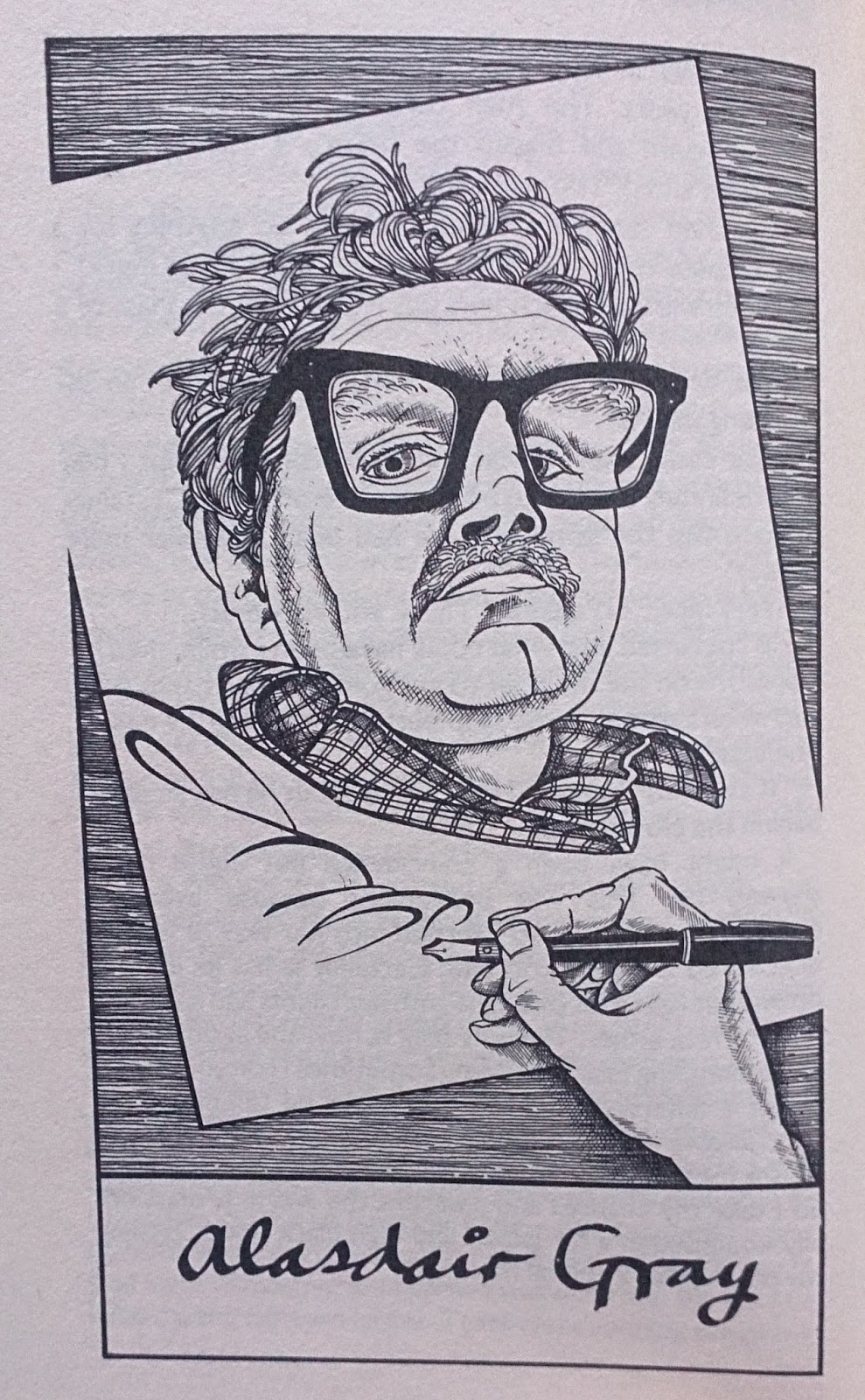 There is a brief section on his mural painting here, with a recreation of his first mural commission. This was for the Scotland-USSR Friendship Society premises on Belmont Crescent and rather than ape the Socialist Realism style that you may have expected, he created a rather more dystopian vision in "Horrors of War", inspired by works of Durer and Brueghel. As a child I attended many functions in this building with my family, and cannot for the life of me recall ever seeing this mural before, but I do remember playing in the long garden that they had at the back of the building. The building has since been sold on and the mural is now underneath wallpaper apparently.

Other murals however can be seen in the west end of Glasgow, such as mentioned above in the entrance to Hillhead underground station, outside the bar in the Western Baths Club, lining the walls of the Ubiquitous Chip stairwell and most famously adorning the roof and walls of Oran Mor's auditorium.


If you aren't handy for the west end of Glasgow then you can see other murals out at the Greenbank Parish Church in Clarkston, Kirkfield Tavern near Lanark or in Cumbernauld on the walls of the exhibition centre of Palacerigg Nature Reserve (which is a grand wee day out if you've got children).

Alasdair Gray has spent years recording a version of Glasgow in words and pictures, so it is great to see Glasgow trying to return the compliment and I would encourage anyone who hasn't been to these exhibitions yet to go along and see them.
Posted by Glasgow Punter at 14:31