Just a quickie to say that I was at the Scottish National Track Cycling Championships today so that I could have a wee nosey around the new Sir Chris Hoy Velodrome which has popped up in the east end of Glasgow opposite Celtic Park. This is part of the infrastructure being built for the Commonwealth Games in 2014. I was really impressed with the whole set up, the building, the neighbouring arena where the Glasgow Rocks basketball team are playing now, the car parking. Even the facilities were decent enough with a wee sports shop, cafe, loads of toilets and wine and beer available from the kiosks if that's what you fancy.
Amazingly enough this is the first ever Scottish Track Championships held under a roof, the old Meadowbank Velodrome being outdoors. This has been a three day event, the morning we went along was really just an excuse to see the track in action but the events that were on were entertaining. There was loads of car parking, though admittedly it was very quiet when we were there, and lots of people were in using the various sport facilities and gyms. 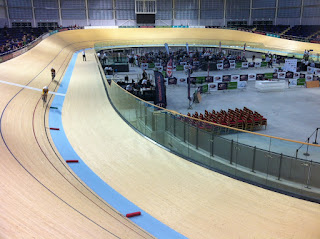 I went wandering about the stadium and when you look down from the top of the slope at the cyclists below you, it is a fair old height. There were a few rubber tyre marks down the slope suggesting that we maybe missed a couple of crashes yesterday. That would have hurt.
I also had a quick run about to look into the sports arena part. I understood that it was going to have an indoor athletics track sunken into the floor which could be raised at the press of a button. This made me think of the swimming pool scene in "It's a Wonderful Life". It turns out, when you think about it, only the curved ends of the track need to move up and down (obviously).
All in all I think it looks fantastic, and when you see it you realise why the Kelvin Hall arena was a bit past it for athletics events. I hope that the people of the east end of Glasgow get every opportunity and encouragement to use these facilities.
Posted by Glasgow Punter at 14:12