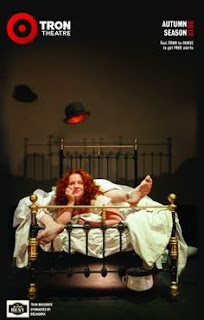 I thought that James Joyce's book Ulysses was universally known, the archetypal difficult read, a stream of consciousness over 800 pages. Certainly on visiting Dublin you are confronted with a veritable Ulysses industry of guided tours of places mentioned in the pages as Leopold Bloom wanders the streets over the 24 hours of the book. However, I mentioned to a big Irishman I know that I was going to see the play of the book last night, currently on at the Tron Theatre and was met with a blank stare. So I am glad that Andy Arnold decided to do a full production of the stage version penned by Irish writer Dermot Bulger several years ago, to force this unique book back into our consciousness. I've read the book once about 20 years ago and from memory struggled to give my wife an outline of the story before we went to the play, but I was amazed how many of the scenes and even some of the lines ("History is a nightmare from which I am trying to awake") came back to me as the story unrolled. I enjoyed the book when I read it. It is surpisingly playful, lewd, imaginative and at times melancholy. Putting the thoughts of the characters down on the page was a new and different idea at the time, but we are now more familiar with it via Kafka, through Jack Kerouac, Bret Easton Ellis to James Kelman, and Will Self's Booker prize nominated book of this year, Umbrella. Usually I like this style of writing, sometimes not. It depends whether the characters have anything interesting or worth hearing going through their mind, doesn't it? I could read Kelman's book happily one after another, and it was Ulysses really that introduced me to this type of writing I suppose. Reading Ulysses I wasn't really aware of the allusions to episodes from the Odysseus, as the Greek hero makes his way home to Penelope and his son Telemachus. I don't think that I knew the Odysseus well enough to get any of that, but now that we've all seen "O Brother, Where Art Thou?" playing the same trick I get it now. Before going to see it last night it was the theme tune of the classy 80s cartoon Ulysses 31 that was on an endless loop in my head, but now that I've seen the play, it is Joyce's version that I'm thinking about now.
I don't know the book well enough to compare book to play, but as a play I think the staging of it captures the feel and atmosphere of the book very well indeed. The stage version makes a good decision playing up the sorrowful thread of Stephen Daedalus, the surrogate son character, haunted by guilt around his mother's death whilst Leopold Bloom stews melacholically over the death of his son Rory as an infant. It moves along with pace, whilst containing many quotations from the book and moving from one episode to another smoothly.


It was clearly going to be a challenge to get the book into a 2 hour piece of theatre, but they do phenomenally well cramming as many episodes and scenes from the book onto the stage. The action all takes place on one beautiful set of an Edwardian office/ home/ bar, with Molly's big brass bed centre stage. The 8 actors are back and forward as different characters which can be a bit jumbled and confusing at times, but I liked the loose, jumbled, swarming nature as the paths of characters cross and collide throughout the day. Jean-Paul Van Cauwelaert as Leopold Bloom is impeccably played and full of pathos, whilst Muirean Kelly’s unfaithful Molly Bloom holds the attention completely when she is on stage, particularly in the final piece as she contemplates her life and their relationship.


I've plucked the book off my shelf now, blown off the dust and am looking forward to reading it again with fresh insight. Funny thing is I just finished reading Murakami's 1Q84 which clocks in at 426,000 whereas Ulysses is a tiddler at only 265,000.
Posted by Glasgow Punter at 20:17