What To Do Near Glasgow When You Get Some Unexpected Autumn Sunshine?

The Forth and Clyde Canal ("the Nollie"), Whitelee Windfarm, Eaglesham and David Livingstone Centre, Blantyre. 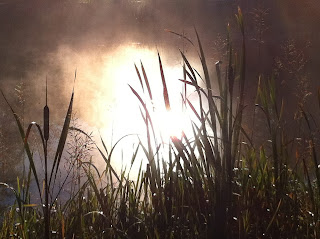 This summer has been miserable and wet in Glasgow, usually at its worst whenever the children have been off from school, so it was an unexpected treat to wake up this September weekend to find an unfamiliar yellow thing in the sky. There was no sign of the feared armageddon either after meteors or satellites had been spotted last night descending to Earth in the skies over Scotland last night. If you were up and about early today in Glasgow you will know that although it was beautifully sunny, it was also cold and frosty. This made it a gorgeous morning for an early run and I ended up getting carried away and going on much further than I'd planned as I was so enjoying running through the mist rising up from the Forth and Clyde Canal (or "the Nollie" as it is called locally).
﻿
Not wanting to waste the chance of going out with the children without 5 layers of waterproof clothing we packed a picnic and headed down Eaglesham way to visit Whitelee Windfarm, Europe's largest windfarm which you can see to the south of Glasgow from most high vantage points. Although this may not seem the most obvious day trip, it has miles of good paths for walking or cycling amongst the dozens of turbines and from up on Eaglesham Moor there you can see Ailsa Craig and Arran in one direction, Glasgow and the Campsie Hills in the other. So what is the WW2 connection between Eaglesham Moor and Maryhill (specifically the barracks at the Wyndford that I was running past earlier)? Keep reading for an answer...

There is also a smart wee visitor centre run by the Glasgow Science Centre, with some hands-on stuff for children and a decent cafe. Today for the school holidays they also had a collection of owls casually sitting about, accepting the attentions of excited children. The scale of the turbines and the size of the windfarm are hard to take in until you are walking amongst them. I think that the turbines are fantastic things and I can happily wander here for hours. Anyway, in the days before there were wind turbines here, on May 10, 1941, Rudolf Hess landed on Eaglesham moor, apparently coming to meet the Duke of Hamilton. He was held prisoner in Maryhill Barracks for his trouble.

Looking around for some other nearby visitor attraction to entertain the weans with whilst there was still no rain on a weekend day we settled on a visit to the David Livingstone Centre at Blantyre.

﻿
This is a National Trust run place, a museum telling the life story of Blantyre's most famous son; doctor, missionary, explorer - David Livingstone. He certainly lead a remarkable life, starting off working in the local mill and living in a single room in the mill owned tenement building the museum is now housed in until he went to University in his twenties. Although his life story is viewed through rose-tinted spectacles here as an anti-slavery campaigner, it is hard to separate this from the fact that he was trying to extend British trade routes into the heart of Africa and seeking to convert the locals to his faith.﻿﻿
I quite like dusty, old-fashioned museums so enjoyed this a lot and although it must be over 25 years since I was last here, it was all very familiar. One thing that stuck in my mind from my childhood visit I was pleased to see was still there. In a glass case containing Livingstone's old medical equipment, is a cast of his arm bone, badly broken when he was mauled by a lion. As well as the fact that the lion attack story is a good one, I remember as a child wondering how they managed to get a cast of his arm bone. It shows, I think, that even in his own time his body parts were being treated like saintly relics. The lion story also caught the imagination of one of the 20th century's greatest film makers, Ray Harryhaussen, whose stop-motion animation brought to life films such as the Sinbad films and Clash of the Titans. There is a large statue in the grounds here of the lion attacking Livingstone and his party, in Ray Harryhaussen's unmistakable style. Why, you may ask?
Well, Harryhaussen is married to David Livingstone's great-grand daughter. Strange, but true!

There was still time to head back up to Glasgow to see the mighty Partick Thistle stay top of the First Division with their sixth consecutive league win, this time a narrow 2-1 win over Cowdenbeath. Strange, but true! Jackie McNamara continues to do it.
﻿﻿