What's not to like about a concert that sells itself as "Billy Bragg and KT Tunstall Celebrate Woody Guthrie's Centenary"? 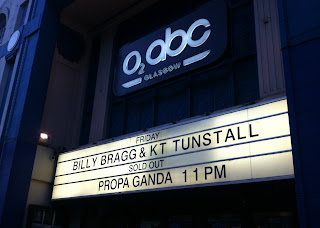 This sold out show took place at the ABC in Glasgow as part of the No Mean City festival 'celebrating Americana' and was one of a short series of concerts Billy Bragg is playing around the UK to mark the 100th anniversary of the birth of Woody Guthrie, who died in 1967 of the inherited condition Huntington's Disease. Bragg has recorded and written music for numerous previously unheard Woody Guthrie songs before.  The recordings that Billy Bragg made with Wilco, The Mermaid Avenue Project, came about after Woody Guthrie's daughter gave him access to many of Guthrie's archives and unrecorded lyrics and if you haven't heard this stuff it is well worth listening to. He said in an interview with the Scotland on Sunday that turning up a song Woody Guthrie wrote about the River Clyde, after his brief time in Glasgow whilst a merchant seaman during World War 2, inspired him to play one of these gigs in the city.

As a child, in the days when family parties involved my auntie Carol singing "The Crystal Chandalier" or my great-uncle Andy singing "I Had Only Half a Crown", I took my turn by either singing "Who Will Buy?" from Oliver or "This Land Is Your Land" by Woody Guthrie. Afterwards I guess I came to his other songs through listening to Pete Seeger and Bruce Springsteen before I finally gave in and bought some CDs of his crackly old recordings and read about his remarkable life. The point Guthrie's daughter Nora is making is that there was more to him than just this one iconic song and that is really the idea behind the Mermaid Avenue Project and this gig, so it wasn't all Tom Joad and This Land Is Your Land tonight.

I've seen Billy Bragg play before, most memorably in a great concert with Dick Gaughan, so I was hoping to hear tales, facts, diatribes and anecdotes as much as music and thankfully he spent as much time talking as singing, which was just what I was after.

He started by duetting with KT Tunstall on a Woody Guthrie song, before leaving the stage to her to play some of her own new material and a couple of her oldies, all in Woody Guthrie style, one voice and an acoustic guitar. She has a great voice and although she described her new stuff as "less perky and all about death" such as "Carried" she can also do angry. I hadn't realised that "Poison In Your Cup" was written after seeing the look on George W Bush's face leaving office. Also one of her new songs gave her the opportunity to display her fine whistling skills. (cf Andrew Bird)

After they managed some fantastic harmonising together on "Deportees" (I know, harmonising with Billy Bragg's voice) the stage was left to Billy to take us through some of the songs he wrote, at times with Wilco, to Woody's lyrics. The songs were diverse, from one double entendre filled song about Ingrid Bergman which let him shoehorn in a topical joke about the Duchess of Cambridge, to union songs such as "I Guess I Planted". One stand out song was "Slipknot" and all accompanied by acoustic guitar or his new Gretsch guitar which he lovingly stroked.

He then sung a song Woody Guthrie penned on leaving Glasgow on board ship heading back to America, "Scotch Hills". This being the song's first outing Billy had re-wrote the tune for it at rehearsals this afternoon, and had to remind himself of the final tune from his iPhone recording from the afternoon (the same device I made this crackling recording on - sorry for the quality). Very weird hearing a Woody Guthrie song about "farewell to old Glasgow". Wow, he really didn't just bum about in the Dustbowl.

For an encore he raised the biggest cheer of the night singing "Scousers Never Buy The Sun" from his excellent Fight Songs CD, very topical with the Hillsborough Enquiry published earlier this week, before giving us an updated version of "The Great Leap Forward" - so updated it proposed it was "time to give Craig Levine the sack" and to "Free Pussy Riot", surely the first time one song has combined such disparate wishes. For a grand finale KT Tunstall was back as they sang a Scottish version of "This Land Is Your Land" she had penned today. Singing "From Caledonia, to the Western Islands, from the pinewood forests to the Gulf Stream Waters" worked remarkably well. She even managed to get Tunnocks tea cakes and Irn Bru into it - what a talent!