Tony Allen's recently released first record for the Blue Note label looks back at the work of Art Blakey, with a four track EP. He expands this in a live performance at the Glasgow Jazz Festival 2017 at the Old Fruitmarket. Born in Lagos, Nigeria, Tony Allen's drumming style mixed West African rhythms with jazz music, from the likes of Art Blakey and Max Roach, to create his own unique style and sound that drove forwards the music of Fela Kuti and others to create "Afro-beat". Since then he has been sought out for collaborations by many different musicians. I saw him perform with Keiran Hebden (Four Tet) at the Tramway in a eye-opening collision of improvisation and electronic squeaks and squwaks. He played a couple of albums with Damon Albarn (as The Good, The Bad and the Queen) and performed drums of one of my favourite ever songs "5:55" by Charlotte Gainsbourg.

Tonight's performance with a jazz quartet is therefore, in some respects, a step back to his roots, to his own influences and teachers. Art Blakey was born in 1919 in Pittsburgh. He played drums with the likes of Thelonius Monk, Dizzy Gillespie and Charlie Parker before forming "Art Blakey and the Jazz Messengers". In 1947 Art Blakey traveled to Africa and stayed there for 2 years. The influences he took away in his drumming, then came back to African music through Tony Allen.

The Old Fruitmarket looked pretty full as the four musicians came on stage. With a dread-locked Jean-Phillipe Dary at the grand piano and keyboards on his right, and on his left Matthias Allamane on double bass, Tony Allen sat centre stage behind his drum kit, directing proceedings. With a nod here and a raised eyebrow there from behind his sunglasses, he would set off the saxophone or bass on a solo, before bringing it all back together with a rap on the drums. 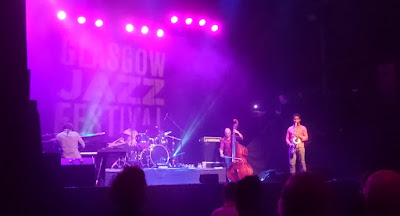 There was never any showboating or tedious noodling, but some classy playing from some classy musicians with the drums driving it all forwards. There were smiles on the faces of the musicians, clearly enjoying what they were creating, and certainly I sat with a wide grin on my face all night. The drums sounded like there was more than one percussionist on stage at times, the polyrhythms pressing onward. A lovely night of beautiful music, and a fantastic ensemble, led from behind the drum kit.