It is 18 months now since the 2014 Commonwealth Games finished in Glasgow. By most accounts the games were a spectacular success, with all of the sports on display getting great crowds attending from Glaswegians. At any sporting event now it seems obligatory to talk of what "legacy" the games have left behind, there is even a Legacy 2014 website extolling all the benefits the games brought to the city. Did it encourage people to be more active, seek out new sports to watch or participate in? I'm not sure.

During the games I certainly went to see sports that I had never paid to watch before, but realise that, by and large, my spectating has largely fallen back to following Partick Thistle week in week out. My children still enjoy going to their assorted badminton, athletics and swimming clubs but we have not been spectators at any of these sports in the city since the games. The football league having a weekend break for the international matches meant that I was looking for other entertainment recently. This made me think about what other sporting excitement people of Glasgow find in their spare time, so I will try a few different sports and see if there is anywhere in town that can match Firhill for thrills.

Last week I took my children to the ice hockey. Then we tried speedway and greyhounds. This weekend with Partick Thistle out of action due to the Scottish Cup semi-finals we ended up watching basketball.

Basketball is one of the world's most popular and widely viewed sports. Living in Britain it is hard to really see that, as it has made no inroads into the national consciousness. The game was devised in the 1890's in the USA and it is there that it is at its peak. However it is surprisingly popular in much of Europe. Many of the top European basketball clubs are part of multi-sport clubs, with Bayern Munich, Real Madrid and Barcelona playing against CSKA Moscow, Panathinaikos Athens and Olympiacos in the Euroleague. Greece would not be the country that you would automatically think of as one of the world's basketball superpowers, but they are acknowledged as one of top international powers. This was brought home to me when I arrived at Thessaloniki airport one summer, in northern Greece, at the same time as a new signing for one of the local teams was arriving. Huge crowds were waiting to greet him at the airport as I got off of my flight, as my friends meeting me there excitedly told me. You would not expect to see that at Glasgow airport for a basketball player.

When I was younger if you were outside playing playing with your friends, it was usually at football or football, but football no longer holds that monopoly on people's leisure time. A wee pitch near my house in Partick is kitted out with football goals and basketball hoops. In the morning you may see a few younger kids playing football, but most of the time the pitch is hogged by groups of older youths playing basketball, both overseas students and locals. They've got all the gear on as well, the big baggy shorts and the club vests.

Professional basketball in the UK is organised by the British Basketball League (or BBL), formed in 1988. Twelve teams make up the current BBL Championship league, with no relegation or promotion to other tiers. There also exists the Scottish Men's National League.

The league runs from September to April, with teams playing 33 games. After this the top eight teams enter the knock-out play-offs to decide the champion. Matches consist of four 10 minute quarters, and overtime played if the teams are tied at full time.

The only Scottish team in the UK league are the Glasgow Rocks. Originally called the Edinburgh Rocks, they were formed in 1998 and were based at Meadowbank Arena. After four years as an Edinburgh team, they moved to Braehead Arena as the Scottish Rocks. Six years later they were on the move again, playing their home matches within Kelvin Hall. The last time that I came to see them must have been about 7 years ago, as I occasionally brought the kids to see them at the Kelvin Hall, as it was easy for us to get to.

With a deal between the team and Glasgow City Council they were renamed the Glasgow Rocks for the 2009/10 season and in 2012 they moved to their current home in the newly built Emirates Arena, in the east end of the city. This arena has one of the biggest crowd capacities in the league at 6,500 if the main hall is used for matches, although usually a side hall is all that is required.

The match that we have pitched up at is the last match of the regular season, Glasgow Rocks against Worcester Wolves. It is a bit of a dead rubber, with the play off qualifiers already decided. In fact the next two matches Glasgow will play after today's game are home and away ties against....Worcester Wolves. 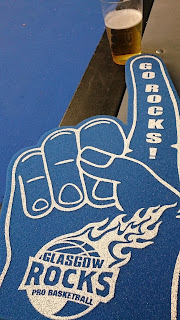 One problem I have had with basketball is that you do seem to be unusually tall to have any chance of success in it competitively. As an average sized Glaswegian, this makes me feel that it is not a sport for normal folk like me. My presumption was that the team would be made up of gargantuan journeymen from around the world. However a surprising proportion of the squad are actually Scottish, with one (Jonny Bunyan) even being under 6 foot tall. At the other end of the spectrum is 6 foot 10 inch tall, Stirling born Kieron Achara. Club captain and UK team co-captain, he is certainly the one that the fans look up to, as he was awarded the "most valuable player" of the season before the match started tonight.

Before taking our seats in the Emirates Arena I got my daughter a big foam finger and for me a beer. Unfortunately it was just a bottle of Budweiser poured into a plastic cup, but as we are deemed too uncivilised to be able to manage beer at football matches, I always find it odd when it is an option and feel obliged to partake.

After the obligatory cheerleaders waved their silver pom-poms about a bit, we are entertained with a medley of naff snippets from the film Braveheart mixed amongst the intro music. Finally the match is off and running. By its nature basketball is high scoring and end to end stuff. It is more physical than the non-contact sport we occasionally got offered in school PE.

The scores ticked over and the players swapped around a fair bit. I am guessing that getting game time for everyone was as important as anything else in this game, before the teams face each other again in the play-off quarter finals next week. Worcester have had the advantage over the Rocks in the regular season so far. I'm not entirely up on all the rules of basketball, but the referee tonight did seem particularly picky in some of his decisions, making a stop/start sport just a bit more stop/start than it needed to be.
I tend to find sports with a selection of short musical stings and sound effects trying to generate an atmosphere a bit grinding, but I guess it is part of the basketball thing. Also the co-ordination of the chanting from the PA tends to make me want to clam up and rebel. However plenty of the people around me were happy to join in the calls of "DEFENCE- DEFENCE -DEFENCE" making up for my reticence. In the breaks between the quarters of the match a variety of child-friendly entertainments took place on the court, with children and families being a big part of the audience.

Things were evenly poised at the end of the third quarter, but in the last 10 minutes the Rocks pulled away to take the match 80-69. Things will be different next Friday night when the game will have to be a bit more competitive, with the scores of the home and away legs being put together to decide who goes forward to the next stage. Tonight we were happy to have been supporting the winning team and wandered home. As we spilled out onto London Road opposite Celtic Park at the end of the match, we were instantly reminded of the sporting clash in the city that had drawn bigger crowds to Hampden earlier that day. As we walked to Bridgeton train station I decided to confiscate my daughter's big blue and white foam hand and shove it up my jumper to avoid being mistaken for celebrating Rangers fans.

Despite being completely bemused by what I was doing with her souvenir of the match, my daughter enjoyed her trip to the basketball. I was a bit underwhelmed by it as a sporting spectacle. It is definitely a sport you see more people playing than ever before in Glasgow, but that hasn't translated into a seething mass of excited youths storming down the doors to see the Rocks play. At the moment the youths playing basketball in Partick are still sporting the colours of the Chicago Bulls and the LA Lakers.