(David Greig's adaption of Alasdair Gray's "Lanark" had it's preview showing in Glasgow last night and this is a brief review. If you haven't read the book before going to see the play, and don't want to know the story, look away now as it may contain some spoilers.)

Saturday 15th August promised to be an exciting day. First up Partick Thistle were taking on Kilmarnock in the afternoon at Firhill, followed by the opening night of Lanark, Alasdair Gray's classic book adapted as a play by David Greig at the Citizens Theatre. Both left me with the same nervous feeling of anticipation, hoping that they would live up to my hopes.


At Firhill the one character that never disappoints is that one created by an artist. Kingsley the mascot, the work of David Shrigley. This surreal, untalking vision wanders around the ground before games and is greeted as if it is perfectly normal to raise a smile at a piece of spikey sunshine walking around in Maryhill. More people around Britain, around the world even, are able to imagine a club called Partick Thistle from Glasgow now because of the work of an artist (and the ongoing efforts obviously of the man inside the costume). The Guardian had a photographer following Kingsley around for a couple of hours yesterday, so it still goes on.

The football itself was a piece of theatre in three acts. In Act One Partick Thistle were all over an agricultural Kilmarnock team for half an hour, but despite numerous chances only managed to get one goal. Those in the audience who have seen this type of performance before could guess what the final act would bring, as Kris Boyd warmed up on the touchline like Chekov's gun. In Act Two Kilmarnock equalised, and before the interval could have been ahead. Then the referee nudged things along by reducing Thistle to 10 men. In Act Three we were amazed to find hope as Kris Doolan put Thistle in the lead, before Kris Boyd came off the bench to inevitably snuff it out. It was a great game of football...for the neutral, but left a feeling of injustice and of a missed opportunity for those of us of a Partick Thistle persuasion.

"Man is the pie that bakes and eats himself, and the recipe is separation." - Alasdair Gray, Lanark


I don't think Alasdair Gray had the Firhill pies in mind when he wrote that, which today could generously be described as "well fired".


As a huge fan of his work I've written about Alasdair Gray before, when a series of events and exhibitions celebrated his 80th birthday last year. That year focused largely of his artworks. His first novel, which cemented his reputation, is "Lanark: A Life In Four Books". First published in 1981 it was apparently written over several decades and, as is the case in most of his books, has both words and pictures provided by Gray creating a unified vision. It tells the parallel and intersecting stories of a young man, who takes the name Lanark, awakening in the sunless city of Unthank (which has a passing resemblance to Glasgow), and of a young man called Duncan Thaw (who has a passing resemblance to the author). "A life in four books" their stories are told in the order of book three, one, two then four, with Duncan Thaw's story being sandwiched in the middle of Lanark's when read this way. Neither men truly fit in or understand their worlds, which seals their fate. In an extended epilogue the "author" meets Lanark and discusses the book and the plagiarisms he filled it with (some real, some invented). He tells Lanark that...


"The Thaw narrative shows a man dying because he is bad at loving. It is enclosed by [Lanark's] narrative which shows civilization collapsing for the same reason"

The book is full of nods to other stories, artists, authors and ideas. An "index of plagarisms" in the margins of the epilogue contains refences as varied as William Blake, Joseph Conrad, Walt Disney, Tom Leonard and HG Wells. Of note is the mention of Robert Burns


"Robert Burns' humane and lyrical rationalism has had no impact on the formation of this book, a fact more sinister than any exposed by mere attribution of sources"

The artwork of the separate book frontispieces also references those that have gone before such as this from "Book Four". The frontispiece of Hobbes Leviathon is redrawn with a landscape of Scotland in the foreground, complete with Dunoon, Faslane and the Forth Rail Bridge. (If you want a colour print of this beautiful image to own, Alasdair Gray recently reworked these for the Glasgow Print Studio).

In this spirit the theatre company have created a wee Pinterest board of plagarisms that they may have used, and they suggest that you look out for more in the play.

One of the main characters in the story is Glasgow, with the necropolis in the East End featuring as a gateway to another world (or to a building resembling Stobhill Hospital if you prefer). The book is witty, political, confusing, poignant, frustrating and brilliant. When I heard that David Greig and the Citizens' Theatre planned to make a stage version of the book the obvious question was "How the hell are they going to manage that?" Some of the challenges that they faced are maybe evident in the fact that the first preview night at the Citizens' had to be cancelled, meaning we were watching it tonight on its opening night in Glasgow, before it transfers to the Edinburgh Festival. David Greig seemed to me a perfect choice to interpret the book. He has had success with adaptions as diverse as Euripides' The Bacchae with National Theatre of Scotland and a musical version of Charlie and the Chocolate Factory. I've enjoyed his plays Dalgety, Dunsinane, The Glasgow Girls and The Events. If you don't already follow David Greig on twitter I would heartily recommend it for terrible puns, political rants and energy sapping tales of his hill running exploits. His works are the kind of things a country can produce when art is funded and supported. To quote Alasdair Gray...


“People in Scotland have a queer idea of the arts. They think you can be an artist in your spare time, though nobody expects you to be a spare-time dustman, engineer, lawyer or brain surgeon.” 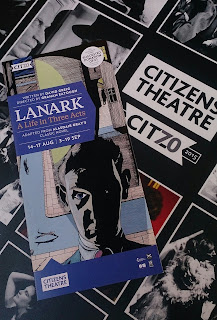 The solutions that they have found to some surreal passages in the book is evident from the first minute with the clever use of projections and animation throughout, often with a nod to the authors original artworks.  Sandy Greirson, who recently played Ivor Cutler on this stage, plays the role of Lanark, and seems to fit the role well. Never manic or hysterical, he presents an essentially good man beneath an emotional carapace.

“He watched them with the passionate regret with which he saw them play football or go to dances: the activity itself did not interest, but the power to share it would have made him less apart.” - Alasdair Gray, Lanark


Jazz tinged music adds an atmospheric sense of place and time as Lanark and the audience arrive in Unthank and a huge degree of choreography goes into revolving the seemingly simple stage set to create a variety of scenes. Greirson is supported by a fantastic ensemble cast, with several well-kent faces from the Scottish stage (Andy Clark, George Drennan, Jessica Hardwick, Paul Thomas Hickey, Louise Ludgate, Helen Mackay and Gerry Mulgrew. Camrie Palmer and Ewan Somers). The first act (Act Two, obviously) finds Lanark trying to work out who he is, trying to fit in and find love in a world where people inexplicably disappear. As his itchy patches of skin inexorably reveal themselves as dragonhide, a metaphorical carapace made real, he descends in a literal sense to a futuristic (in a 1970s Logan's Run type of way) Institute, where those who seem to run the world reside.

The second act (or Act One - keep up), connects Lanark to Duncan Thaw, the real life of a "Proletarian snob" from the east end of Glasgow determined to be an artist. The cast lead Thaw through his life from the scaffold that becomes Ben Rua and his workplace on an epic church mural. A child with asthma and itchy eczema becomes a man unable to find love and falling into despair and mental illness. Again the script and Greirson don't play this with melodrama but with pathos and an ebbing away of hope.

The final act thrusts us back to Unthank after the characters wander aimlessly and surreally across the Intercalendrical Zone, where the actors break through the theatrical "fourth wall". Whilst civilisation is descending into chaos Lanark must try to save his city and try to connect with his wife and man-child (Ewan Somers doing an impressive turn in the style of Baby Brent from Cloudy With a Chance of Meatballs). In the book Gray smashes through the fourth wall with his epilogue to talk to Lanark, on stage this is done in a clever and incredibly imaginative way which chimes so well with the book.

It is a book rammed full of ideas, images, metaphors and devices and it feels as if almost everything in the book has managed to find a place in the play. If you asked 100 different uber-fans of the book which bit had to be kept in for the play you might get 100 different replies. Whilst satisfying the geeks, the play also opens up the book to those who have never got around to reading it in a way that is accessible, whilst entirely in keeping with the unique spirit of the original. That feat may have taken almost four hours of work this evening by all involved in the production, but it was a fantastic and mind-spinning evening of theatre.


"Glasgow is a magnificent city," said McAlpin. "Why do we hardly ever notice that?" "Because nobody imagines living here," said Thaw... "Think of Florence, Paris, London, New York. Nobody visiting them for the first time is a stranger because he's already visited them in paintings, novels, history books and films. But if a city hasn't been used by an artist, not even the inhabitants live there imaginatively." - Alasdair Gray

I hope that these words by Alasdair Gray are no longer true and that his works help ignite the creative energy of Glasgow and its people. The play certainly feels like it adds to this legacy.