With Partick Thistle back in the top tier of Scottish football I wasn't expecting to see some great leap forward with regards to the football on offer (and in that respect my expectations have been met) but one thing I was looking forward to was re-visiting some grounds that I haven't been to for years. Already this season it has been nice to re-acquaint myself with Easter Road and also with St Mirren's new ground. One other old rivalry I was looking forward to re-visiting was with Kilmarnock FC. The earlier fixture at Firhill ended 1-1 with a Kris Boyd equaliser in the second half. However since then both teams have struggled to pick up points so I (naively) fancied our chances at Rugby Park.


I wasn't just wanting to pick up a Killie pie and a Killie bunnet when I was in town (that's the Alexander Brothers singing the Big Kilmarnock Bunnet song above). Another reason I was looking forward to this wee jaunt down to Ayrshire is that one wing of my family comes from down Kilmarnock way and I fancied trying to have a wander around the town to see what it has to offer. The Visit Scotland website isn't exactly bursting with suggestions of what to look out for so I thought I'd start by trying to track down any addresses in town inhabited by my ancestors which are still standing. A few years ago I got quite into tracing the old family tree and found that at the end of the 1700s my great-great-great-great grandfather, a weaver from Paisley, moved to Kilmarnock. His son worked in the town, also as a weaver, but as industrialisation moved on apace his son left that trade and was a coal miner in the local pits. In the 1860s he was living at Back Street, which I found was bulldozed to lay out Portland Street. His wife, an immigrant from Ireland, according to a census of 1861, helped make one of Kilmarnock's famed products which featured in the Alexander Brothers' song, as she was a bonnet knitter. Their son married Lizzie Jane Hay, a domestic servant from nearby Hurlford, so I started there.
She lived on Riccarton Road in Hurlford and this is a postcard she sent home once when visiting relatives there. Although the town was once home to Jimmy Knapp of the RMT Transport Union, there hasn't been a train station in Riccarton since 1955 and Riccarton Road today was less picturesque than it was 100 years ago, although the children did appear to own shoes nowadays.

One thing which Hurlford is known for is its junior football team which plays at Blair Park and it has a reputation as a "football nursery" with professional players Ian Bryson, David Calderhead, William Goldie, Jack Picken, Sandy Turnbull, Arthur Young and Colin Douglas all calling Hurlford home at one time. I have a couple of old photographs of my Kilmarnock ancestors in football teams but can find no trace of Kilmarnock Hillhead Victoria FC now. 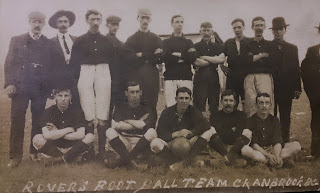 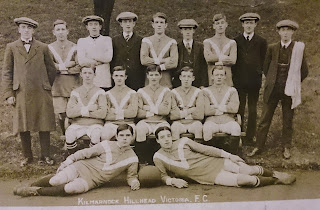 So as there were nothing standing of the places my family used to live in Hurlford maybe I'd have better luck if I headed into Kilmarnock. My great grandfather when he married lived at number 5 East Netherton Street in Kilmarnock in 1906. This house is still standing, no longer a family home, but a dental surgery.

Later they moved around the corner to 14 High Glencairn Street, which I was also able to visit, and order some chips and curry sauce from their old front room, as it is now a Chinese takeaway. Underneath the "Ocean Sun" frontage you can clearly see there is a good, solid, old house there. A lot of Kilmarnock seemed to be like that. There are swathes of the town centre flattened as industries have come and gone or brutalised, such as with the concrete monstrosity of a shopping mall which lies beside old buildings at Kilmarnock Cross. The nearby winding streets struggle to show their former handsome selves.

Like the character in the Kilmarnock bunnet song, my great grandfather put on his bunnet (maybe one his mum knitted him as it was her occupation) and headed to Glasgow, where he worked as an iron moulder in the Harland and Wolff shipyard in Govan. He is in the photo above, the guy with the bunnet on. One of his brothers stayed in Kilmarnock, Robert Climie, working as a draper's clerk. Then he worked as an engineer in the Britannia Engineering Works in Kilmarnock, owned by the Dick, Kerr Company, which made locomotives and tramcars. There he became active in the trade union movement and the Independent Labour Party (ILP). In 1914 he became chairman of the Scottish TUC. His obituary mentions one of his successes in getting £50,000 in back wages for the women workers of the Singer Manufacturing Company. He worked for many years on the town council and stood in parliamentary elections for Kilmarnock and represented the town as MP in 1923 and 1929. I've a great photo of him standing beside Keir Hardie in another blogpost here.  He has a short street in the town named after him for his efforts, so a quick visit to Climie Place was my next destination.

A lot of this information here I gleaned from previous visits to the archive at the Dick Institute and now a lot of this old archive is stored at the Robert Burns Monument Centre where a statue of Robert Burns looks out over Kay Park. 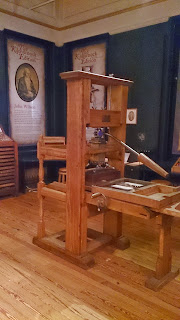 Another association Kilmarnock has is in the phrase "Kilmarnock Edition". Robert Burns's most famous work "Poems Chiefly In The Scottish Dialect" was published in Kilmarnock in 1786 (around about the time my relatives moved to town) and is more commonly known by that phrase. A swanky online edition of the book is available here. The success of the Kilmarnock Edition of his poems lead the famous son of Ayrshire to abandon his plans to go to Jamaica and continue his writings in Scotland. The Dick Institute (titter, titter) is the town's museum. I found it a bit of a hotch potch, with the library and temporary exhibition space on the ground floor given over to a thing on Jacqueline Wilson. All the olde Kilmarnock stuff I was interested in was a bit of a jumble in one rooms on the first floor, gathering dust, with wobbly display cases and old photographs curling off of their mountings. It was a sad collection of now departed industries from the area, from coal, through to the Saxone shoe factory. They did have a printing press of the type used to produce Burns's work. Here I learnt that the case holding the movable type letters had two drawers to it, the capital letters held in the upper case, the lower case letters held in the....you see where this is going?
Another famous son of Ayrshire associated with Kilmarnock is a chap called John Walker. A grocer, he started selling his own whisky in his shop as "Walker's Kilmarnock Whisky". After it became legal in 1860 to sell blended whisky his son and then grandson expanded the enterprise and renamed their whiskies Johnnie Walker, and it is now the world's best selling Scotch whisky. The wee man striding across the label is known everywhere. When ANC activist Zola Zembe (who I've mentioned before) was staying with us in Maryhill in the 1970s he was delighted to see that there was a familiar figure on the advertising hoarding across Maryhill Road from our flat. He called the man "Walking Johnnie" and when he was in South Africa to him this was such an archetypal image of Scotland, that he was delighted to see Walking Johnnie out of our windows in Glasgow. On the wall of the goldsmith's shop on King Street is a plaque telling you that this was John Walker's original shop, where he started selling his whiskies. I think the plaque means that shop and not the ugly Claire's Accessories shop next door.


Johnnie Walker now has annual sales of 130 million bottles. That must be great for the town, no? Well, no. The distiller Diageo that now owns the brand closed down the Kilmarnock bottling plant in 2012, at that time the biggest employer in town, ending 192 years of association between Kilmarnock and Johnnie Walker's whisky. I went to an old graveyard off Saint Andrew's Street to see if Mr Walker was spinning in his grave - I can confirm that he was, poor chap.
﻿﻿
Leaving the churchyard I then headed for Rugby Park to watch Kilmarnock vs Partick Thistle. Despite dominating the match for almost the entire 90 minutes Thistle spurned numerous chances and let Kilmarnock score two sloppy goals. Sadly this is becoming the familiar shape of our campaign. Largely playing with a slightly weakened version of last season's First Division winning squad we were always going to struggle. Despite a neat goal from Kris Doolan, it's a poor day when a Killie pie is the highlight of the match.