I need to start this by admitting that I'm a bit of a Dostoyevsky groupie. I first read Crime and Punishment as a teenager and was completely hooked from the start. I turned my back on your Bronte sisters and Jane Austens. For a few years I could see no further than Russian literature and worked my way through Lermontov, Goncharov, Gogol, Turgenev, Gorky and the rest, but mainly the works of Dostoyevsky. Emile Zola and Victor Hugo I allowed myself, treating them as honorary Russians as they also featured sufficient misery and gloom for my tastes.

Ever since then I keep returning to it again and again. Recently I've read Norwegian author Knut Hamsun purely because Gide called him a "Norwegian Dostoyevsky" (wrongly) and read Russian author Vyacheslav Pyetsukh's "The New Moscow Philosophy" because it was supposed to be a "reprise of Crime and Punishment". Again I ended up disappointed. So when I found out that the Citizens Theatre in Glasgow were putting on adaptions of two of Dostoyevsky's books I was delighted, if a little anxious about how that would work out.

When we were on holiday about 9 years ago in Moscow and St Petersburg I ended up, without planning to, turning it into a bit of a Fyodor Dostoyevsky tribute tour. I've got photographs of myself and my children standing in front of Dostoyevsky's statue outside the Lenin Library in Moscow. However it is when you are in St Petersburg that you realise that city is an ever present character in many of his books, none moreso than in Crime and Punishment. Having read the book a couple of times before arriving in the city I was surprised at how grand, clean and open the city was. 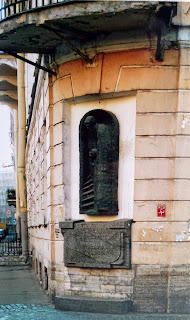 The streets and taverns Raskolnikov inhabited in my mind should have been more like the narrow streets of the Victorian Gorbals, yet here we found wide canals and streets, solid, dignified looking buildings and there was light. Obviously I was visiting a modern city, tidied up for our times but it was hard to put the Raskolnikov of my imagination into these grand streets. His attic flat in the book is described as "under the very roof of a tall five storey building, more like a cupboard than a living room". The descriptions are so real that the flat has been identified at a street called Stolyarny per, a street I had to visit. The spot is now marked by a plaque of Dostoyevsky, climbing the aforementioned stairs. Again this looked like a bright, healthy, solid building more akin to a romantic garret than a claustrophobic hovel. In Dostoyevsky's day there were apparently 22 bars in this street, so maybe that, the tuberculosis and the more crowded living accommodation of his day needs borne in mind. He takes 730 steps from here to get to the pawnbroker's house where he commits his crime. Beside this block a wide canal looks delightful, but apparently at the time stank from the sewage tipped into it and in the book there is reference to suicides throwing themselves into these same canals.
Again look at this picture I took of the block thought to be where the murder took place, just not what I'd imagined. He runs out of the pawnbrokers house and through a tunnel onto the street beside the canal, so the tunnel in the centre of this block is where I picture it happening now.
We retreated to a bar called "The Idiot", named after another of his novels, and I began to feel more the atmosphere of his times. Although the walls inside were white and clean and bookshelves lined them, the arched roof and pillars of this basement bar felt like the kind of tavern in which Raskolnikov might have met Marmeladov. Here we looked up some other Dostoyevsky themed things to see. In 1849 whilst a prisoner of the Tsar for taking part in revolutionary activities, Dostoyevsky was taken to Semyonovsky platz and faced a mock execution.
Now called Pionerskaya Ploschad the square has no feel of an execution site and has all the detritus of a bustling city, but that is as it should be. Glasgow Green in my own city is a place we go to run about and play rather than go to see people being hanged nowadays. He was then taken to a Siberian labour camp where he lived alongside murderers and criminals who inspired his ideas for Crime and Punishment.
The flat where he lived his later years, and died, is now a museum to the author. Here he wrote The Brothers Karamazov and when we visited the market outside gave a better idea of the bustling streets of the 1860s and 1870s St Petersburg. Nearby, facing Vladimir Cathedral stands a statue to the author and this was the last site I visited on my pilgrimage to Fyodor.


The point I want to make is that you create a very clear picture in your head when reading a good book, particularly one that you love, of the characters and their environment. This isn't a bad thing, but it needn't necessarily be what the author imagined or any other reader pictures. For this reason when I saw that the Citizens Theatre were doing a production of Crime and Punishment I was delighted but approached it with some trepidation, fearing certain disappointment in seeing a version different from my own. However on re-reading it recently I try to imagine how you could stage it and I find new things in it again. When I first read it I remember his mother being old. Caring but a bit clueless. When I read it again I find that "although Mrs Raskolnikov was forty-three her face still preserved traces of its former beauty". Forty-three! Steady on, Fyodor, that's not exactly ancient! But this is important, Raskolnikov is a young man for whom forty-three is past it. He is full of confidence and ideas and fight. Full of anger. The long passages in the book where he debates with himself seem ideal for a theatrical staging. The detective, Porfiry, is a prototype Columbo who knows despite a lack of evidence who the murderer is, but badgers him into confessing. Some adaptions or re-imaginings work. Then again have you ever seen the 1958 film of The Brothers Karamazov with a young William Shatner playing the monk Alexei Karamazov? Every time he is on screen you expect him to raise an eyebrow and flip open his communicator. I am more hopeful for Richard Ayoade's imminent film adaption of The Double. Not all of his books I can imagine well on stage but the two on show at The Citzens I could certainly see working well.

As the Citizens were staging adaptions of two books I decided to see them in the order in which they were written. First up was Notes From The Underground, the inaugural production by The Visiting Company starring Samuel Keefe (who I recently saw in The Changeling at Oran Mor, playing a similar angular, nippy sweetie role) and Millie Turner. This is on in one of the Studio Theatre spaces and the dark, small room worked well for the story, even if my back still aches from the blooming seats they have in there. Immediately before writing Crime and Punishment Dostoyevsky penned Notes From The Underground, a short novel in which the author through the monologues of the anonymous narrator berates society. It starts "I am a sick man....I am an angry man. I am an unattractive man. I think there is something wrong with my liver." This bitter character also vents his spleen against the aged - "To go on living after forty is unseemly, disgusting, immoral!" He tells the story of his bleak meeting with former colleagues from school, and later a prostitute, "that 'damned' Liza". He wonders "which is better, a cheap happiness or lofty suffering?"

The character in the book is spiteful, isolated, vengeful, ashamed and weak. Not an easy role to play and expect sympathy from the audience, but Keefe does it with aplomb and shows the vulnerability and insecurities of this man. He may be making his "notes" with an iPad or mobile phone rather than pen and paper but, using much text from the original book, little updating is required to maintain his existential angst in our modern times. Feeling humiliated from above and powerless against his superiors, he turns around and takes his anger out on someone weaker than himself. The book was conceived by Dostoyevsky whilst imprisoned and the "grief and disintegration" he felt there is surely just as resonant in today's society. It is clear that the "Underground Man" wallows in lofty suffering rather than trying to enjoy cheap happiness. That is to be what Raskolnikov has in store for himself too. Notes From The Underground was written as a bitter rebuttal of Utopian Socialist Chernyshevsky's novel What Is To Be Done? Dostoyevsky disagreed with these ideas that mankind would achieve happiness by acting with enlightened self interest. This book (the title of which was later borrowed by Lenin as the title of a more practical "How to do revolutions" pamphlet) is prominent again in the production of Crime and Punishment.

This production of Crime and Punishment is co-produced by The Citizens, Liverpool Everyman and Playhouse and Royal Lyceum Theatre companies and written by Chris Hannan. The ten strong cast are always on stage, milling around or playing the accompanying music, giving a good atmosphere of the bustling city within the book. Adam Best plays Raskolnikov with all the hunger, anger and poverty required. His friend Razumikhin is played by the fabulous Obioma Ugoala in a way that would make anyone gratefully take him as their best friend. George Costigan plays Porfiry's Colombo role whilst avoiding the tics of Peter Falk as much as possible. A lot of detail from the first half of the book is crammed in, as Raskolnikov puts forward his case that the extraordinary human is above the law if he acts for the common good. The second half slows a little, and his eventual confession, shouted out in the street, is maybe more dramatic, but in the end less powerful than the chain of events which bring him to confess in the book. He heads to a place the author knew only too well, the Siberian prison camps. I really loved getting an excuse to dust off my old Dostoyevsky books. Reading them a decade on from last time I see new things in the books again, and they are as relevant to our times as any other. That was something that both plays managed to convey.

Raskolnikov/ Dostoyevsky may not always have been right, but he had an idea and set out to prove its worth. “To go wrong in one's own way is better then to go right in someone else's.”
Posted by Glasgow Punter at 23:56