One of the most influential composers of the 20th century, Steve Reich is now 76 years old and still as busy as ever in the 21st century by all accounts. Last year Bang on a Can and the London Sinfonietta performed some of his music in Glasgow as part of the "Minimal" series at Glasgow Royal Concert Hall. Now 12 months later the man himself was in town to perform a weekend of his music. His name is usually associated with minimalism, the use of tape loops, field recordings, repetition and hypnotic rhythms which often move apart and come together again and their were plenty of fine examples of this over the weekend.

The Saturday night concert promised a "full night of Reich, including a performance by the man himself". With two intervals and 4 hours to cover pieces from 1967's "My Name Is" to the recently commissioned "Radio Rewrite", premiered last week in London, a full night was definitely provided.

The first part of the evening  was performances by Powerplant with Joby Burgess. He is a percussionist who has often worked with experimental electronic artists and previously recorded versions of Steve Reich's work, which formed the core of his set here. However he didn't get off to the best start as his attempts to record audience members saying "My Name Is..." was thwarted by his computer crashing. Steve Reich managed to do it in the 60s with a tape machine, but the computerised version flopped. I also thought it was a bold move for a man called "Joby" to ask a Glasgow audience "What is your name?" but nobody turned the question back to him. With a 10 minute pause whilst they farted about with their computer one irritated chap tried to start a slow hand clap, but got nowhere as someone at the back of the hall replied to him in the style of Steve Reich's "Clapping Music" which was due up later. The version of "Electric Counterpoint" using his xylosynth, a halfway house between a xylophone and a synthesiser worked well and for someone my age awoke memories of "Little Fluffy Clouds" by the Orb which sampled Reich's original guitar version of the piece. Where the xylosynth really came into its own was on Graham Firkin's "Chain of Command" using samples of speeches of Donald Rumsfeld and George Bush looping like the droned music played in Guantanamo to wear down prisoners. It is very much a "Oh, I'd like to play with that"-type of instrument.

Next Steve Reich himself, peaked cap as ever, came onstage with percussionist David Hockings to perform "Clapping Music" before taking his seat back in the hall to watch the rest of the performances. It was interesting looking back at performances of the same piece on YouTube. When performed tonight, although the rhythm is the same, the softer clapping of a 76 year old man changes the sound and force of it all. "Electric Counterpoint" was performed again, this time with the guitar playing of Mats Bergstrom, which held the attention throughout playing live over the recorded sounds of him playing the other 10 guitar parts. Then 5 members of the London Sinfonietta played "2x5", which I had seen last year and was frankly disappointed with it. This performance was much sparkier and more lively, and steered away from classically trained musicians trying to be funky. However as a piece of music, I still find it drags a bit and this maybe reflects my ambivalence to electric guitars more than anything else. 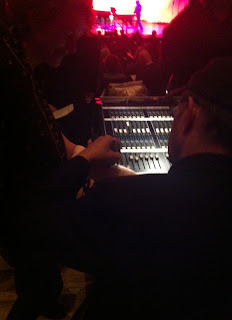 During the interval Steve Reich was signing autographs and chatting to audience members. He seemed unfazed by being asked to sign someone's stookie (or plaster cast if you're not from round here). The queue of people waiting for signatures showed the same childish excitement in their faces that my 10 year old son had shown earlier today when he got his match programme signed by Partick Thistle's Chris Erskine. There can't be many modern composers that get this rock star treatment. Next up was the newly commissioned piece "Radio Rewrite" which he wrote based loosely on the Radiohead songs "Everything in its Right Place" and "Jigsaw Falling Into Place". I was hard pushed to discern any Radiohead in there, but I don't really know these songs well enough but it ebbed and flowed, fast and slow, through them and was one of the highlights of the evening. For a finale 12 musicians from the London Sinfonietta played "Double Sextet", two sextets of piano, vibraphone, flute, clarinet, violin and cello playing against each other. This was the real high spot of the night for me, an excellent performance of a superb piece.
The second part of the weekend started with a talk from Steve Reich in the concert hall's auditorium. I hoped he would expand upon the mad-sounding removal firm that he mentioned in a recent interview that he used to run with Philip Glass. However before that, big Joby was back to try again to perform "My Name Is" which was defeated by technical glitches last night. Firstly we cleared up the fact that his name is pronounced to rhyme with Toby, and the piece itself was worth making the effort to create, the effect of accents and technology making it a very lively work, the throbbing rhythms of peoples voices and names being looped.

The highlight of the weekend was the talk from Steve Reich. The clarity, sincerity and honesty of what he had to say was refreshing. His enthusiasm for African rhythms and music shone through and his desire that people find joy and ecstasy in his music was heartfelt. The insights gained from hearing him talk with such keenness and oomph will send me back listening to his music with new ears. WTC 9/11 in particular I'm keen to seek out and I'll be listening to "Different Trains" again with new perspectives.

I didn't have long to wait for the first opportunity to listen to his music performed again as rattling along next up was a performance of "Variations for vibes, pianos and strings" in the foyer with the National Youth Orchestra of Scotland and the London Sinfonietta.

The Colin Currie Group then took to the stage with "Drumming". The grand praise heaped upon them earlier by the composer was well deserved. I've heard this piece in recordings before but was blown away hearing it performed live. Your ears pick up the altering beats more easily than your eyes can discern any changes in the blurring sticks of the percussionists. By the time that there were nine musicians on the marimbas the hall was echoing to their droning bell sounds. I'd taken my kids along for this part and despite their normal reaction to music which I enjoy being "hmmmm" they too did really enjoy the performance.

It was a invigorating end to a fascinating weekend.
Posted by Glasgow Punter at 20:59