Glasgow's annual "folk, roots and world music" festival, Celtic Connections is up and running, now amazingly in its 19th outing. Unconnected with this but getting into the acoustic/ folky vibe I took up a friend's invite this week to come to her house for a "living room gig". 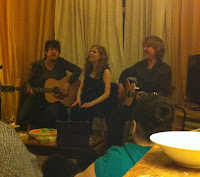 The idea is that you push your sofa to the back wall, squeeze in some friends for some nibbles and the band squeeze themselves into your bay window to provide the tunes. On this occasion the band were Ashton Lane playing their alt.country thing, two acoustic guitars and the voice provided by Esther. The music isn't really my usual thing but it's a great way to listen to live music, and the guitar playing in this instance was great to watch, particularly when one of them was Esther's dad, Graeme Duffin, once of Wet Wet Wet. Weird, eh?
After that I made a quick dash across to Mono to catch the tail end of Alasdair Roberts wee freebie gig launching his new album, A Wonder Working Stone, which is getting rave reviews.

That got my folky juices flowing in time for tonight's gig at the Mitchell Library. "Scots in the Spanish Civil War" was the name of the concert, based on the album that came out last year from Greentrax; "No Pasaran" (They Shall Not Pass). As a child my brother and me often sang along to Jarama Valley on the Laggan's old STUC album "I Am The Common Man", and even though it seems further removed in time now, it is a song that my kids all love to sing along to since I bought it again on CD recently.

The grandfather of a good friend of my parents died in Spain in the International Brigade. I can remember standing near her as the La Pasionaria statue was unveiled on the Clydeside. In my head I can therefore make a direct connection to those that left their homes and families to make a stand against Franco and Fascism. With the passing of the last Scottish veteran of the Spanish Civil War last year it is important that books like Daniel Gray's "Homage to Caledonia" and cds and concerts like this one commemorate these events and I was glad when my son was keen to come along to this concert with me. (If you haven't read Daniel Gray's book I can heartily recommend it, also his romp around small town Scotland "Stramash" is a great wee book).
The theatre at the Mitchell Library was full and the audience were clearly in a mood for joining in. The stage set up was interesting with the aforementioned Daniel Gray and Radio Scotland's Iain Anderson sat at wooden desks either side of the stage with a small lamp illuminating them like journalists in a 30s movie. They acted as narrators between the songs and poems, telling the stories of individuals deciding to leave home and join the International Brigade, their experiences there and of those left at home and ultimately, for many of them, their death or imprisonment. Several of the songs I already knew, but hearing them in this context often brought a lump to my throat. Also, my son got a lot out of the night being presented in this carefully shaped way, with the songs matching the story. The music was outstanding too, with a great mix of styles and ideas. There were eight or nine different groups of performers coming on and off stage to organise. Some old hands were there such as Alison McMorland and Geordie McIntyre and I won't be able to look at the "sleeping giant" of the Campsie Fells again after hearing their song "Another Valley". The Wakes a "Glasgow/Irish folk 'n' roll band" were excellent throughout, particularly their bodhran player. Gallo Rojo, an Edinburgh based group of Spanish and Scottish musicians were my son's favourites on the night with their lively "No Pasaran!". The Peatbog Soldiers is one of my favourite songs on the cd and it was fascinating to hear German trio Liederjan sing the German original version of this marching song. I had never before thought about the bravery of German International Brigade volunteers, who knew what fascism would do to Spain from their own experiences back home before they left everything behind to join this fight. It was a shame that Dick Gaughan was unable to be there due to illness as his heart-felt singing would have gone down a treat on this evening, but Arthur Johnstone stood in for him to lead off the mass singing of Internationale to end the first half and The Wakes sung Ewan MacColl's "Jamie Foyers" in his place. The evening ended with Iain Anderson reading Bob Cooney's poem "Hasta La Vista - Madrid!" and a massed singing of Bandiera Rossa, which was made more emphatic with the German and Spanish musicians singing the verses in their languages. With Arthur Johnstone getting the whole audience going with that and his earlier Jarama Valley. At the end of Bandiera Rossa I wanted to stand and sing the verse from the Soviet Airmen's Song that my brother and me used to finish it with when sung at parties.

This was a great night of music, of stories, of remembrance and of politics combining a lot of what Celtic Connections does so well. The whole complicated event ran like clockwork and had obviously been carefully planned and thought out and we had a really good night out.
Posted by Glasgow Punter at 10:36